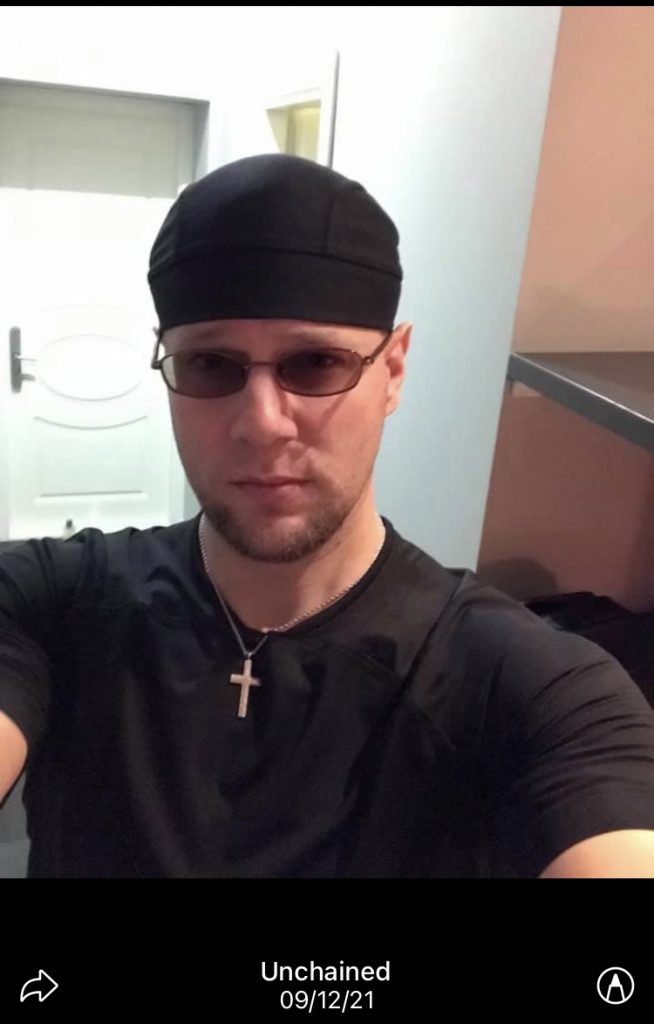 Selfie posted to a nazi chat by account Unchained

Luke Brandon is a vile antisemite and a disgustingly racist and sexist person. He self identifies as a Christian Identity nazi, which means he literally believes that only white people are humans and that Jews are satan. Luke came to our attention after we found him posting openly on a neo-nazi telegram chat about how he had just moved to Montana. Alarmingly, he also posted that he was connecting up with the Montana White Lives Matter nazis to place their white nationalist propaganda stickers up around the towns of NW Montana. Luke purchased a house in Libby Montana in January 2021 and hopes to settle down in Libby permanently while he waits for social collapse. Like most nazis, Luke believes a race war to be inevitable, followed by a total collapse of society from which to then build up a fascist state. Luke dreams of marrying an extreamly submissive white women for the sole purpose of having lots of white children that he can train to fight in the race war. Prior to moving to MT, Luke was an expat in SE Asia for close to six years. Before that, he lived in Southern California. Before joining the Christian Identity nazi movement, Luke Brandon was active with the anti women, male separatists MGTOW (Men Going Their Own Way) community and he produced numerous misogynistic anti-feminist propaganda videos.

The Telegram account “Unchained” spews hate, and identifying the account became a priority when we learned he had moved to NW Montana and was connecting with White Lives Matter. Fortunately, identifying Luke was rather simple. First off, he posts real pictures of himself and uses his real name online. 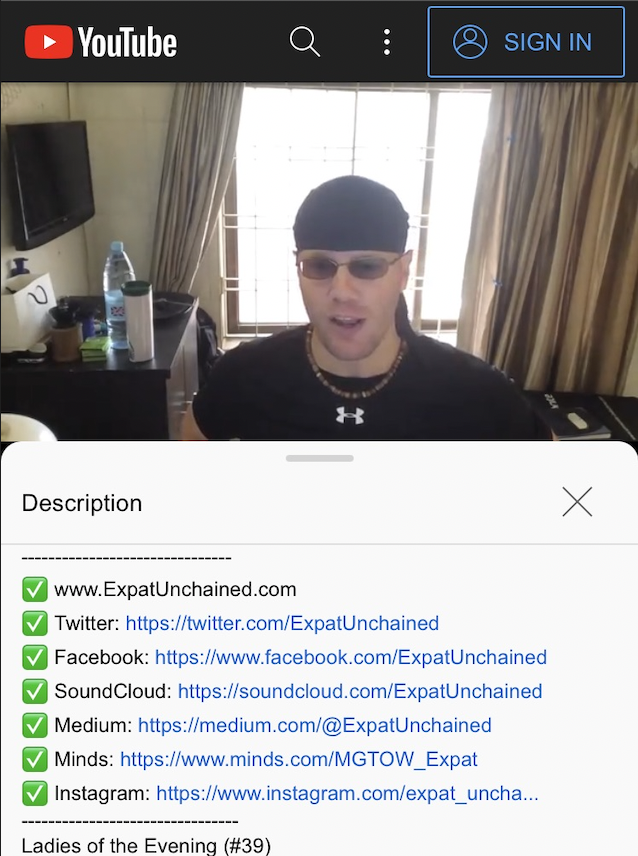 Luke Brandon in video posted while an expat in SE Asia. In this video, Luke Brandon reviews prostitutes.

We found multiple websites where he posted videos under the name “unchained” and “expat unchained” during the time he was an expat in SE Asia. In those videos and in the comments, he would refer to himself as Luke Brandon. While living in SE Asia, Luke Brandon was very active in the MGTOW community. MGTOW stands for Men Going Their Own Way and it is a horribly misogynistic anti-women online community of men who advocate from separating themselves from women. He eventually left the MGTOW community because he thought it was too Jewish. He has now embraced Christian Identity neo-nazism, but keeps the rabid sexism and misogyny of the MGTOW community. For more information on the MGTOW movement, see this article from the Guardian: https://www.theguardian.com/lifeandstyle/2020/aug/26/men-going-their-own-way-the-toxic-male-separatist-movement-that-is-now-mainstream

We watched these videos posted by the “MGTOW Expat,” “Expat Unchained,” and “Unchained” accounts mentioned above, and they are exactly the sort of rambling anti women garbage one would expect from the MGTOW community. Moreover, in all the many videos posted by these various unchained accounts, the presenter refers to himself as Luke Brandon and shows his face. The person in these videos is clearly the same person from the Luke Brandon Facebook profile pic as well as the selfies posted by the “unchained” Telegram and Twitter accounts. Not only has Luke Brandon posted videos providing his name and image, we also found that he posted videos documenting his move to Libby Montana. 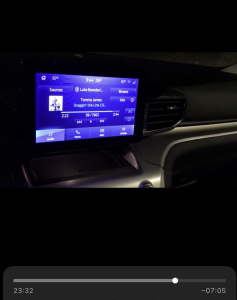 Luke Brandon purchased this Ford Explorer while in Billings, MT

In the videos he posted documenting his move to Libby MT, we learned that Luke Brandon made a pit stop in Billings Montana. In Billings, Luke lived in a rented trailer for a few months. He also purchased a new black Ford Explorer, which he then used for his move to Libby MT. Furthermore, in these videos documenting his move, Luke Brandon films the inside of his new Ford Explorer. We could see, in the video, the sound system is connected to his phone, playing music from a playlist he titled “Unchained” and also showing the name Luke Brandon on the display.

To top it all off, confirming without a doubt that “unchained” is Luke Brandon, on both Luke’s personal Facebook and the “unchained” Twitter account we found the same pictures of the inside his new Libby MT house. Those interior house pictures match with pictures posted in the real estate listing of his house. 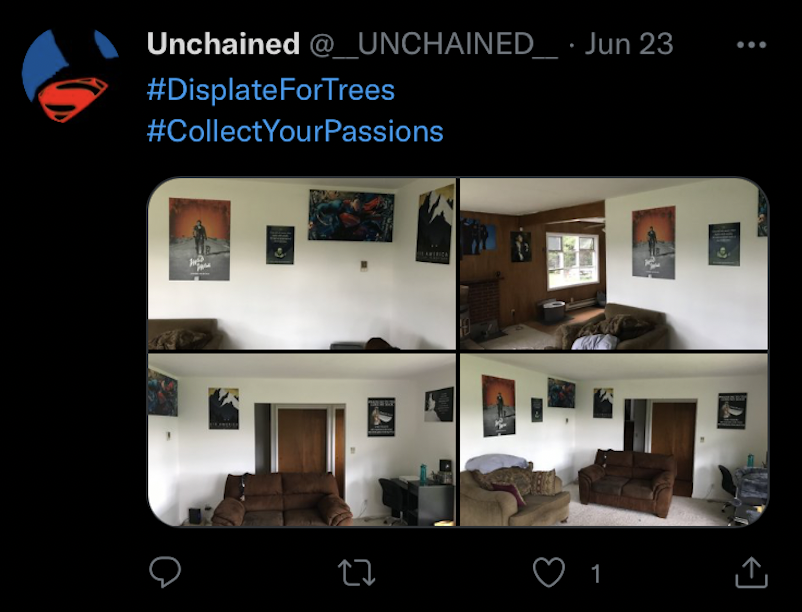 As one can see looking closely, the fireplace in the Twitter pictures, the Facebook pictures, and the real estate listing pictures all match. Searching publicly available property records also shows that Luke Brandon bought the house at 2 Pine Ct, Libby MT 59923 in January 2021. 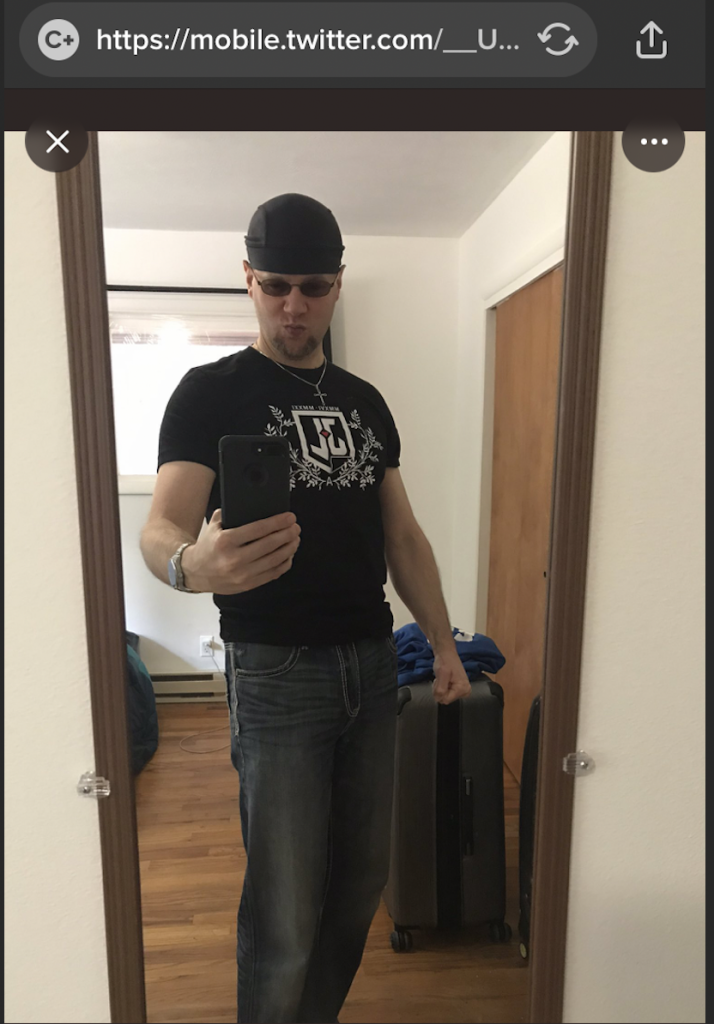 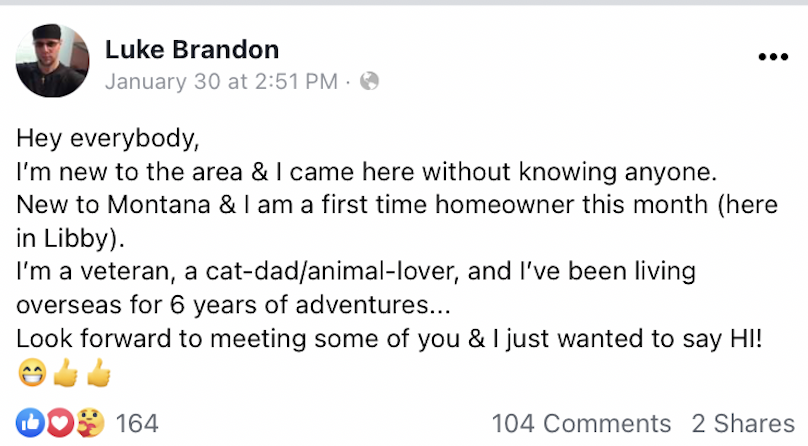 So, being certain that Luke Brandon is the same person as behind the Unchained accounts on Twitter and Telegram, here is some evidence of him being a nazi. 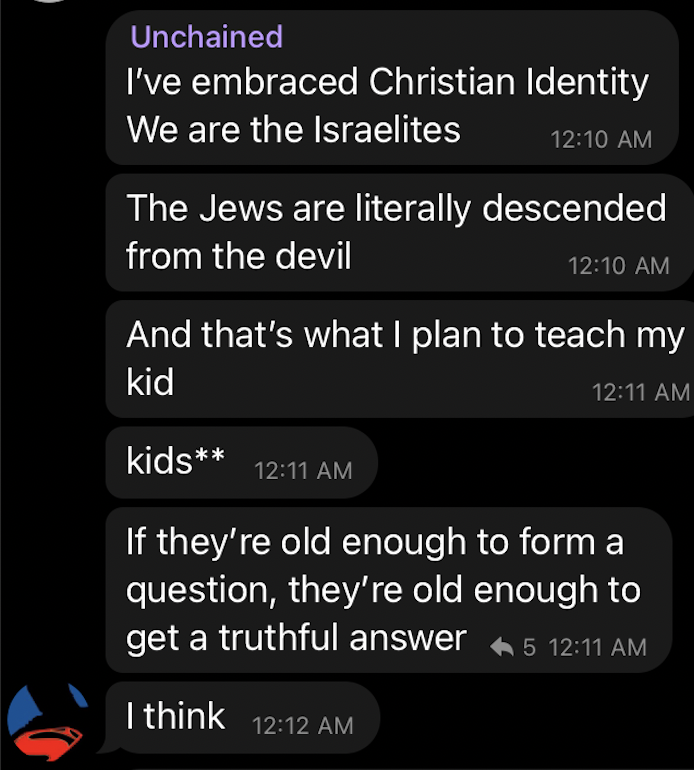 In the posts above, Luke Brandon states that he identifies as Christian Identity. For more information on Christian Identity, which basically is a belief that only white people are human, see the SPLC article on the movement attached via hyperlink: Christian Identity is a unique antisemitic and racist theology that rose to a position of commanding influence on the racist right in the 1980s. “Christian” in name only, it asserts that white people, not Jews, are the true Israelites favored by God in the Bible. The movement’s relationship with evangelicals and fundamentalists has generally been hostile due to the latter’s belief that the return of Jews to Israel is essential to the fulfillment of end-time prophecy.

As someone who was active for years in the MGTOW community, Luke Brandon is extremely sexist. He is more even misogynistic than the average neo-nazi and does not believe that women have any active role to play in the nazi community other than having babies. 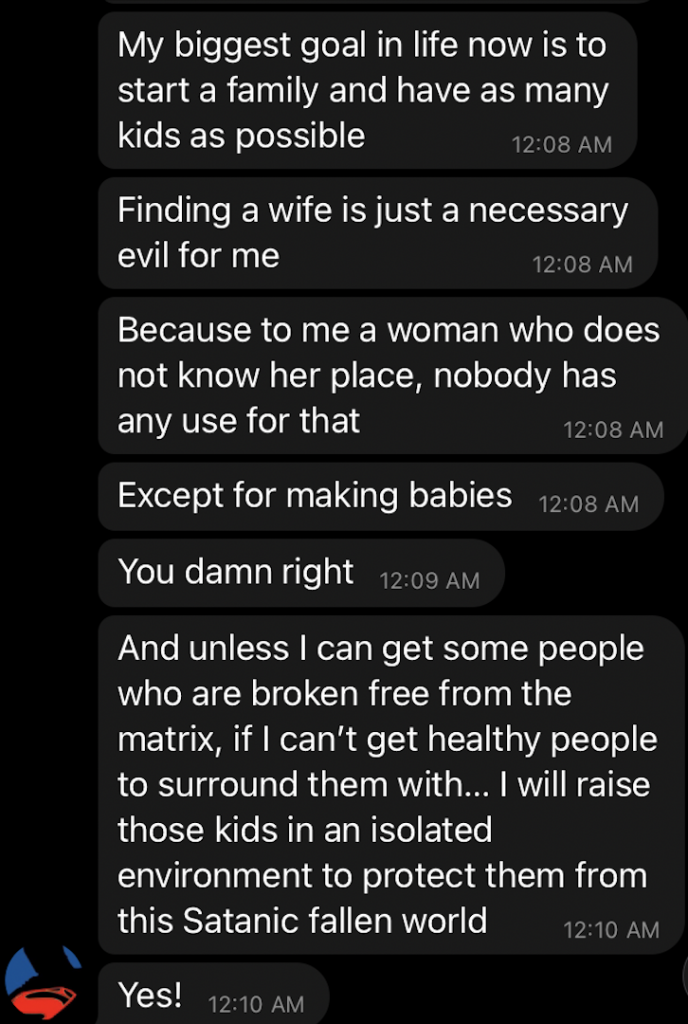 He is so sexist he even attacked a female nazi leader who was interviewed on a nazi propaganda clip regarding the up coming White Unity Conference.

Luke does not share his hate and nazi beliefs on his personal social media, seemingly wanting to keep his new Libby MT community in the dark as to his vile, hate ridden beliefs. Luke prefers to hide his hateful beliefs behind the anonymous “unchained” accounts. That is why we are sharing to the Libby MT community what their new resident, Luke Brandon, truly believes. The screen shots we are sharing are merely a snapshot of Luke Brandon’s disgusting hate.

The “unchained” accounts online belong unquestionably to the new Libby Montana resident Luke Brandon. Now we will show why Luke Brandon is a threat and a concern behind simply being a vile nazi. Mainly, Luke has stated that he is done with waiting, that he wants action. Recently, he connected with the White Lives Matter nazi crew in Kalispell Montana and wants to place similar nazi propaganda around Libby MT. For those unfamiliar with White Lives Matter, it is a racist white supremacist response to the Black Lives Matter movement. For more information, see this Southern Poverty Law article: https://www.splcenter.org/fighting-hate/extremist-files/group/white-lives-matter 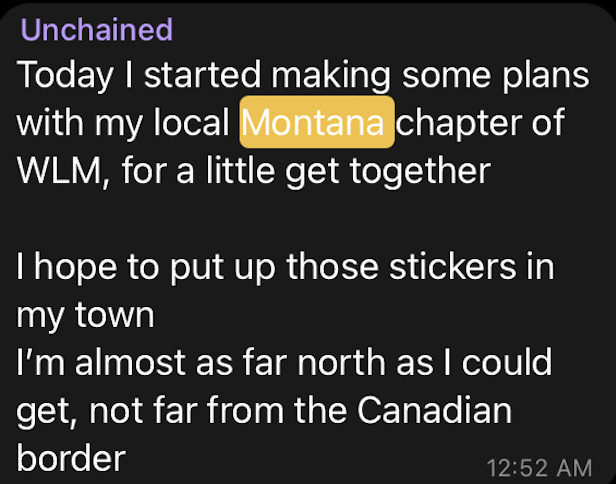 In early September 2021, which is when Luke Brandon made this post about connecting with Montana chapter of WLM, there was also WLM stickers placed during more than one occasion around Kalispell MT. Those stickers were located quickly and removed by locals who do not want nazis organizing in their town. The Montana WLM chapter posted evidence of their nazi propaganda stickers being put up around Kalispell on the WLM Telegram channel. 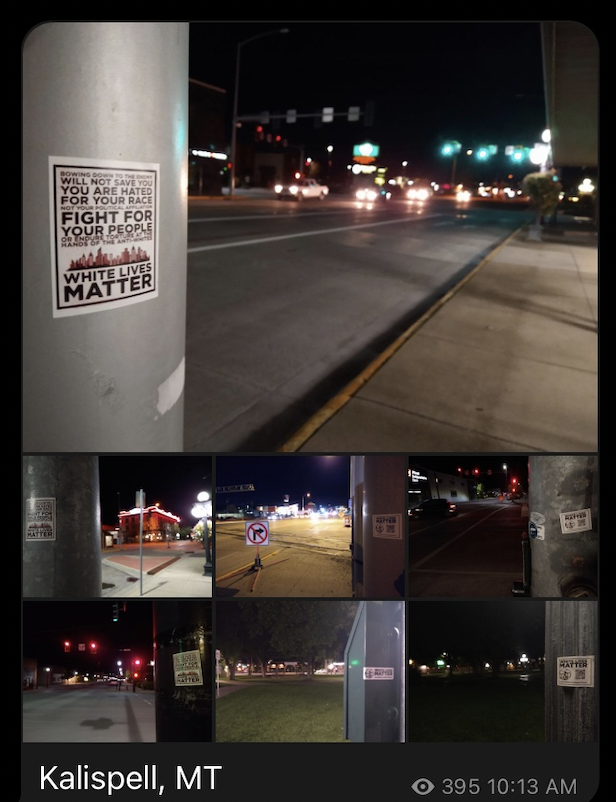 After returning to the USA from six years as an expat traveling around SE Asia, Luke Brandon moved to Libby MT as a location where he would prepare for the “Last Stand.” Nazis like Luke Brandon believe a race war is inevitable and soon, and that the collapse of the United States will happen soon. This preparation for the last stand is to prepare for societal collapse and then to rebuild a new nation as a whites only fascist state. 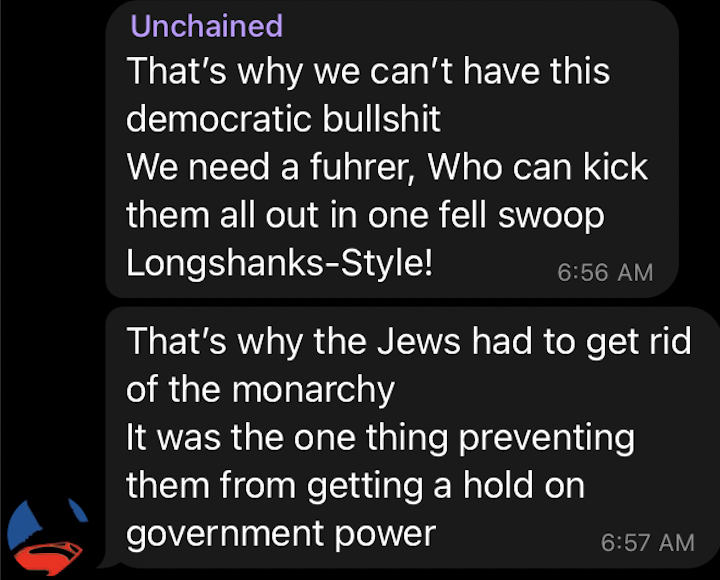 Luke Brandon moved to Montana in hopes modern society will collapse into a race war, in which he dreams of him and fellow nazis emerging from the society collapse to rebuild a new fascist white only nation. Moreover, he is done with online activism; he wants action. 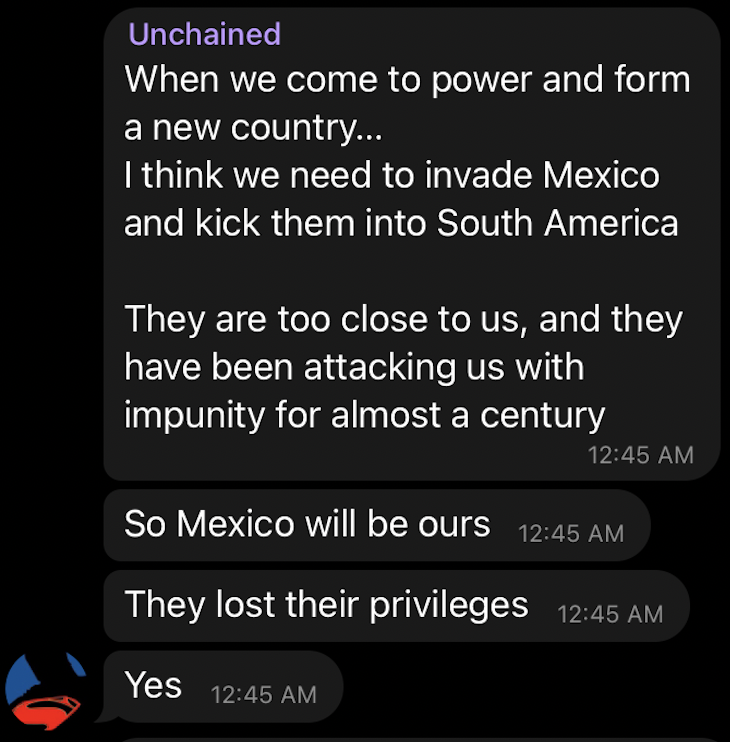 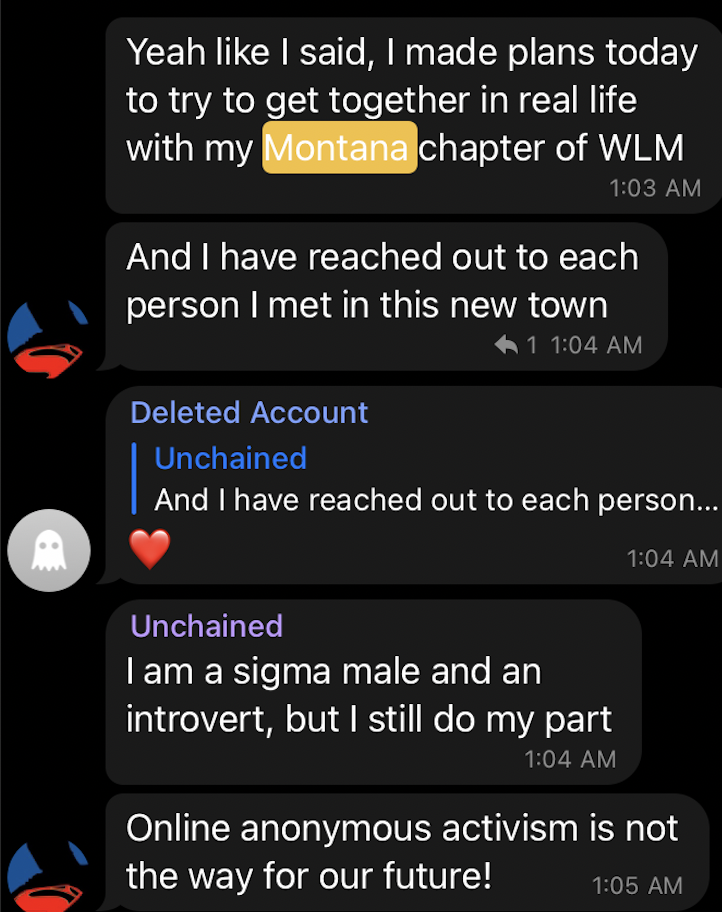 Luke Brandon saying he is done with online activism, and that he has connected with the Montana chapter of the nazi group White Lives Matter 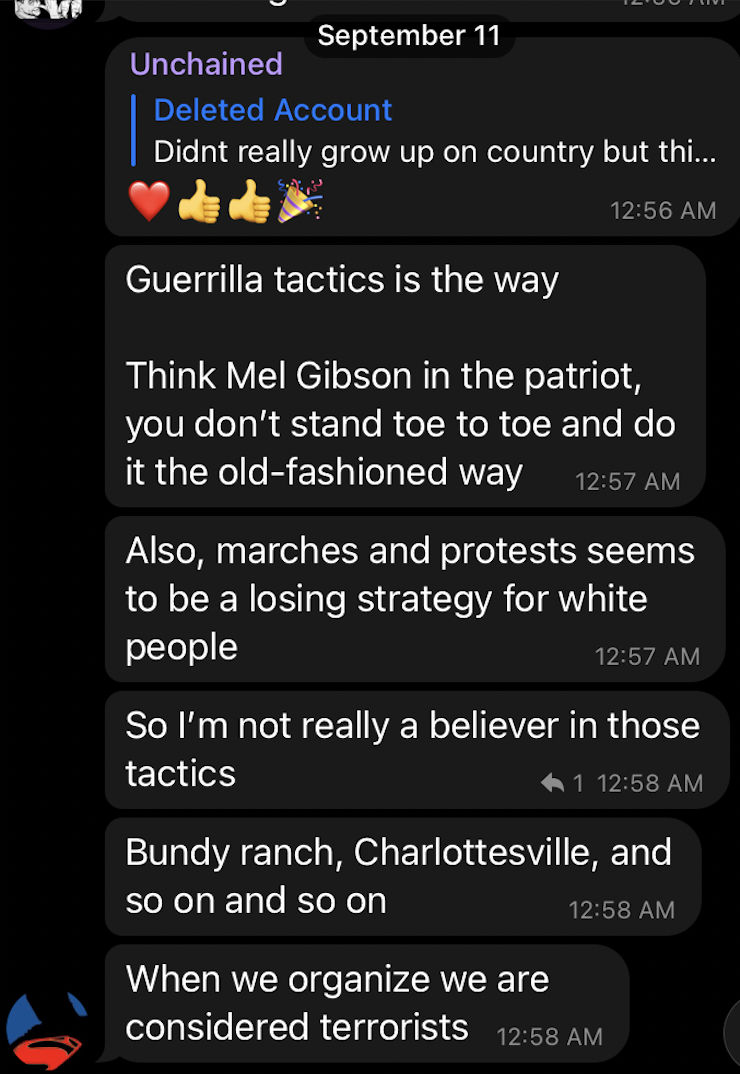 Luke Brandon says he is done with online activism. He does not particularly support marches and protests, but he does support guerrilla tactics as a means of advancing the Christian Identity, white nationalist nazi agenda of creating an all white fascist state. He is concerned about organized activism because, as he correctly points out, publicly organized white nationalists are generally considered terrorists. Those following the Ammon Bundy campaign for Idaho governor should take note of the fact that there are nazis who see the deadly Ammon Bundy ranch standoff for what it is: an example of organized white nationalism in action, just like the deadly neo-nazi Charlottesville ‘Unite The Right’ rally.

Luke Brandon is an active Christian Identity nazi. He moved to Libby MT in January 2021 in order to prepare for what he believes to be the inevitable upcoming race war and social collapse. He longs for social collapse and fantasizes building a whites-only fascist state. While he was for years very active online with videos on multiple platforms, he has recently decided he wants more real life action. He is fed up with the lack of perceived results of online activism and is done with being keyboard warrior. Moreover, now that he owns a house, he does not want attention drawn to himself because he does not want his views to be exposed nor does he want his location to be know. All we can say to that, it too late. If you, Luke Brandon, did not want your hateful beliefs exposed or you location to be revealed, you should have thought twice before bringing your vile Christian Identity nazi ideology to Montana. 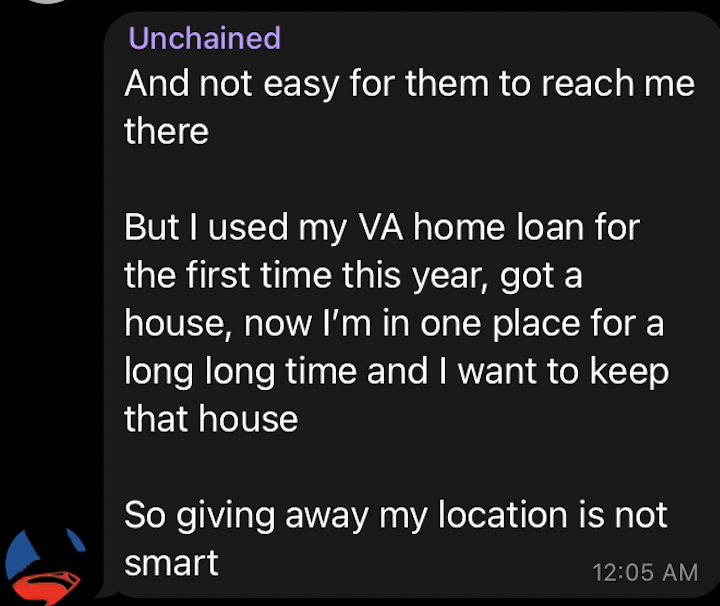 Luke Brandon saying he does not want his location to be known. He lives at 2 Pine Ct. Libby MT 59923. 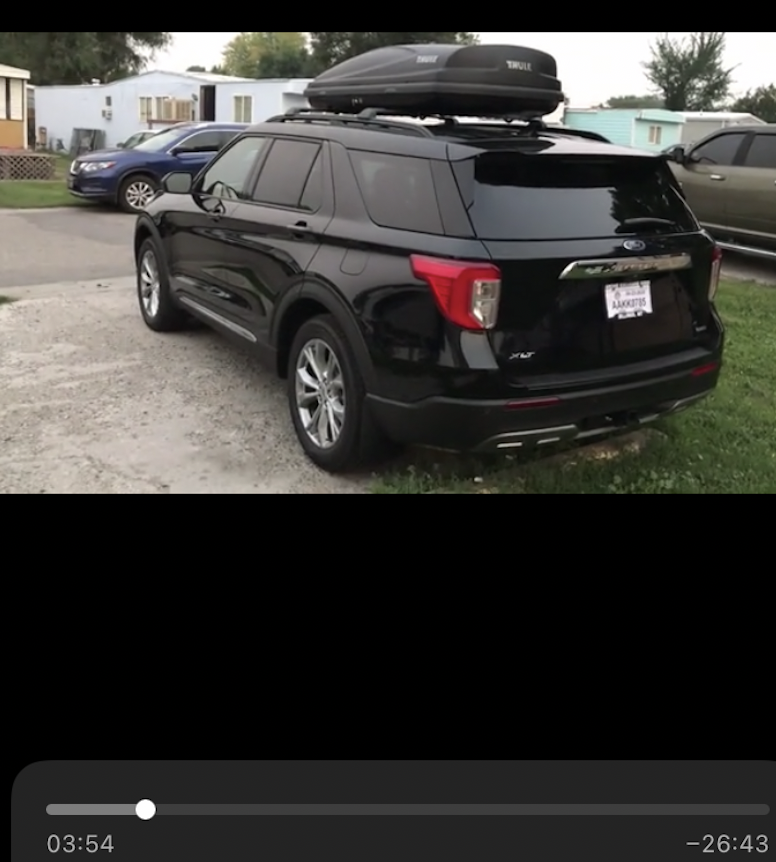 Luke Brandon is racist and sexist nazi. More than that, he is active in the white supremacy community, connecting with other nazis and spreading propaganda.

He is active in the Libby/Troy MT community Facebook groups, and the people of NW Montana should be aware that Luke Brandon is not just a 42 year old single vet who loves cats and superheroes, but that he is also a vile racist and extremely sexist active neo-nazi.

If anyone has further information about Christian Identity nazi Luke Brandon, please email us at redoubtafa@riseup.net

We keep us safe. Solidarity.