Parrish Miller is a sneaky character (as far as loudmouth right-wing extremists go). While he makes plenty of noise on social media, through his tweeting as the Lieutenant Governor, perhaps as the Idahoans for Liberty account on Twitter, or his personal Facebook/Twitter profiles: Miller’s behind the scenes work has largely escaped scrutiny. We found his digital-fingerprints on over 100 websites; we believe this to be just the tip of the iceberg, though. Before we discuss where we found Miller hidden, let’s talk about where he’s known to be found.

This connection was on full display when Miller tweeted as McGeachin recently (November 4th, 2021): 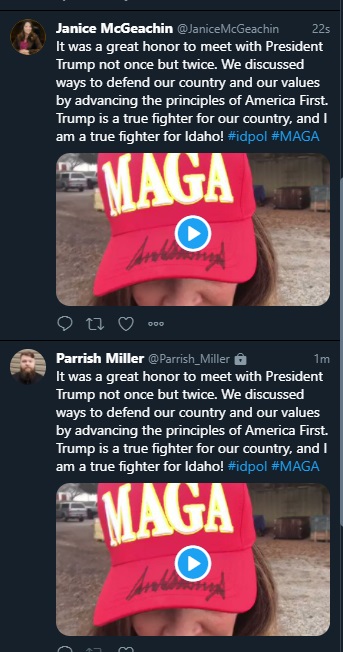 Miller contractually works for Idaho’s Lieutenant Governor, a fact that is significant and should be remembered throughout. This person works from inside Idaho’s state government.

Miller can also be found as an analyst at the far right-wing, Koch-funded, Idaho Freedom Foundation:

The Mixing of Roles

Already, there are red flags. A policy analyst from an extreme right-wing think-tank should not be communicating as the Lieutenant Governor; the Idaho Freedom Foundation is not an elected official and neither is Miller. Addionally, Information technology services are not communications services. Law Insider defines information technology services as:

What this means is: just because your IT guy describes himself as a “policy wonk,” you cannot allow him to communicate as an elected official.

Once again, from Betsy Russel’s article:

While this is concerning, it’s not new: these are things known and covered. What drew our attention, and what made Miller worth a deeper dive, was our almost accidental discovery of Miller’s behind-the-scenes work. We’ve discovered his digital fingerprint on around 120 websites, including several for far-right Idaho politicians and political hopefuls such as Janice McGeachin, Heather Scott, Sarah Clendenon, Karey Hanks, and more. Parrish Miller is also behind the creation of at least one fake news website: Greg Pruett’s Idaho Dispatch.

There are several pieces of data that act as digital fingerprints across the internet.
Name of Business: On many of Parrish Miller’s sites, he simply adds a link to his own business website at the bottom of the page. Finding this identifier on a site, the other fingerprint details present can be deduced as belonging to Miller. We identified 37 sites with Miller’s name or business name.
Google AdSense ID: This is a unique identifier for websites serving ads through Google. Google uses it to determine ads and ad payments through sites that serve them. One might expect the unique AdSense ID to belong to the site owner, which is why we didn’t even consider searching by this detail. According to Google:

Across the websites that we’ve linked to Miller, only 2 AdSense IDs are ever used. They present a total of 12 times across the sites.
Google Universal Analytics Tracking ID: Similar to the AdSense ID, the UA tracking ID can used to identify unique actors in the site’s background source code. The first number is a user’s account number, the second is a property number. Using Google’s reference material for explanation:

This data was present in 76 of the 116 sites that we examined. Miller used one account number across 34 sites, half of which he didn’t sign his name on. Another account number was used 14 times, only “signed” by name once. A third account number was used 20 times that we found, often anonymously.
IP Address:This identifier can’t be said to be truly unique. It appears that Miller has a hosted server in El Segundo, CA. We found around 111 sites running out of that one location. Nearly the entirety of these sites can be linked to Miller through one of the other identifiers previously mentioned. Upon finding this cache, we used the websites listed at this IP address as a jumping off point to examine for the other fingerprints.

All of these fingerprints could be found in abundance in the sites on the El Segundo server. Once a background piece of data (AdSense ID or UA Tracking ID) was tied to Parrish Miller through his name or company credited on a site that used that data, we could then look elsewhere online for those pieces of data outside of the server, or on sites without Miller’s name or business name. This created a “the more you find, the more you can find” situation that kept leading to new discoveries.

Idaho Dispatch – This appears to be a “fake news” right-wing extremist website run by Greg Pruett.
2A Daily News – An even more extreme collection of news, this one is just jarring or offensive articles propping up right-wing extremism and right-wing gun culture. Once again, Greg Pruett.
Free Idaho – This was the website for the mask burning event at the Capitol in March.
Keep Idaho Free – “The last stand for free people to fight back against liberal lunacy.” A website used to attack political enemies anonymously.
Gem State Heist – Another website for attacking those to the left of them anonymously. This site was used in Greg Pruett’s list of targets he released earlier that included Idaho97%, Reclaim Idaho, BLM Boise, and Extinction Rebellion.
Idahoans for Liberty – This is the website that used to be anti-Trump that represents the organization that Ada County Commissioner (and neo-Nazi associate) Ryan Davidson used to helm. It’s devolved into anonymous vile attacks on Twitter as @idahoans.
Idaho on Fire – A website that (anonymously) believes that “environmentally sponsored policies must be challenged and changed.”
Ada County Tea Party – It’s expired now but Miller was behind that one as well.

The full list of sites examined can be found here: 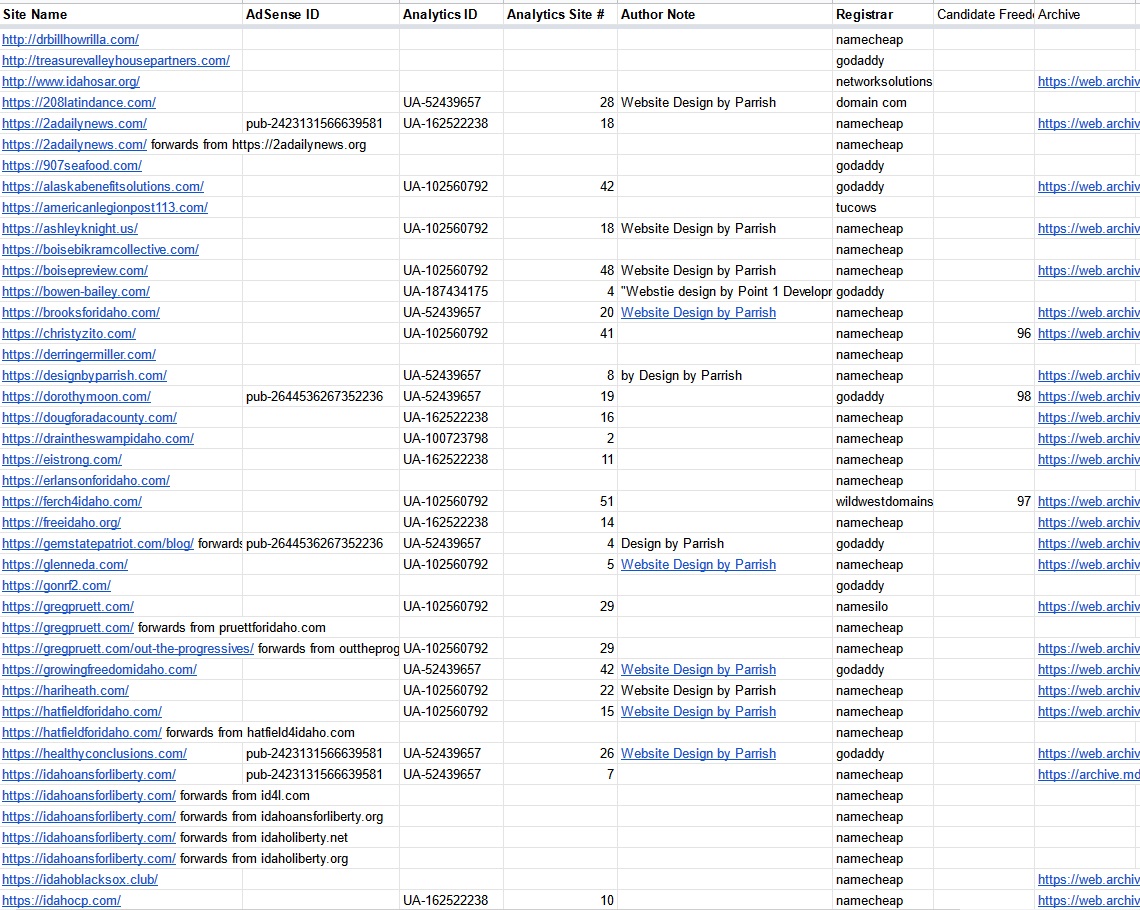 Parrish Miller represents the digital footprint of almost the entire right-wing extremist movement. He’s connected to the anti-CRT movement, the anti-vax/anti-mask movement, Global Warming denialism, pro-2A, and anonymous trolling and targeting of political enemies — even within the republican party (one of his sites anonymously says it’s time for RINO hunting). These aren’t merely philosophical connections, either: Miller is making a living selling this misinformation and incendiary content.

It’s hard to tell which came first, the chicken or the egg. The same can be said about Miller and IFF. Does he do work for their rising stars because of their connection to IFF or do they become connected to the IFF through hiring Miller? Either case is inappropriate: a small group of extremists is coordinating in taking over Idaho in service of extremism. At this point, there is no denying that Parrish Miller plays a major role in this.