Nick Stamolis has gone to considerable effort to remove his information from the internet. As such, very few current pictures of him exist. However, by working with our friends at the SoCal Research Club, we were able to piece together a positive ID on this nazi. 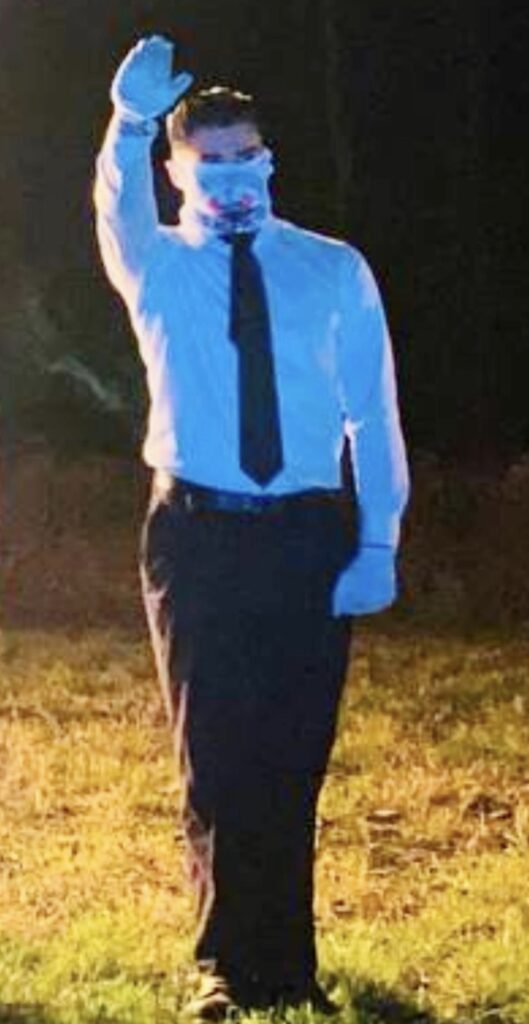 Nick Stamolis at a Church of Aryanity nazi cult gathering

We first learned of Nick Stamolis in late spring of 2022 when he was caught being a nazi at a concert in Boise. The locals who saw him doing Seig Hails at the show then noticed his Black Sun elbow tattoo and sent him home with a busted lip and a bloody nose. The Black Sun, or Sonnenrad, is a pagan symbol that has been coopted by the nazis and is now widely considered to be a neo nazi symbol, see the ADL description for more info https://www.adl.org/resources/hate-symbol/sonnenrad.  Nick was followed and his vehicle was identified. Latter, his address at the time was identified. As we said, he is moving to Texas this week (week of 11/14/2022). As such, we will not be publishing that address.

So, we knew there was a nazi in Boise ID with a Sonnenrad elbow tattoo (he also had a Black Flag tattoo) driving a Toyota Tundra with Utah plates. We did a little online searching and located a Nick Stamolis from Hermosa Beach

Now, there are lots of people who like Black Flag. But, there are not that many people named Nick Stamolis in Boise ID who are also in the punk scene. That is when we reached out to anti fash researchers in California and got in touch with the folks from the SoCal Research Club. As luck would have it, they also were wondering about a Hermosa Beach nazi who was radicalized by RAM and moved to Idaho. RAM, or the Rise Above Movement, is a violent neo-nazi street fighting gang founded by Robert Rundo, see the SPLC for more info https://www.splcenter.org/fighting-hate/extremist-files/group/rise-above-movement 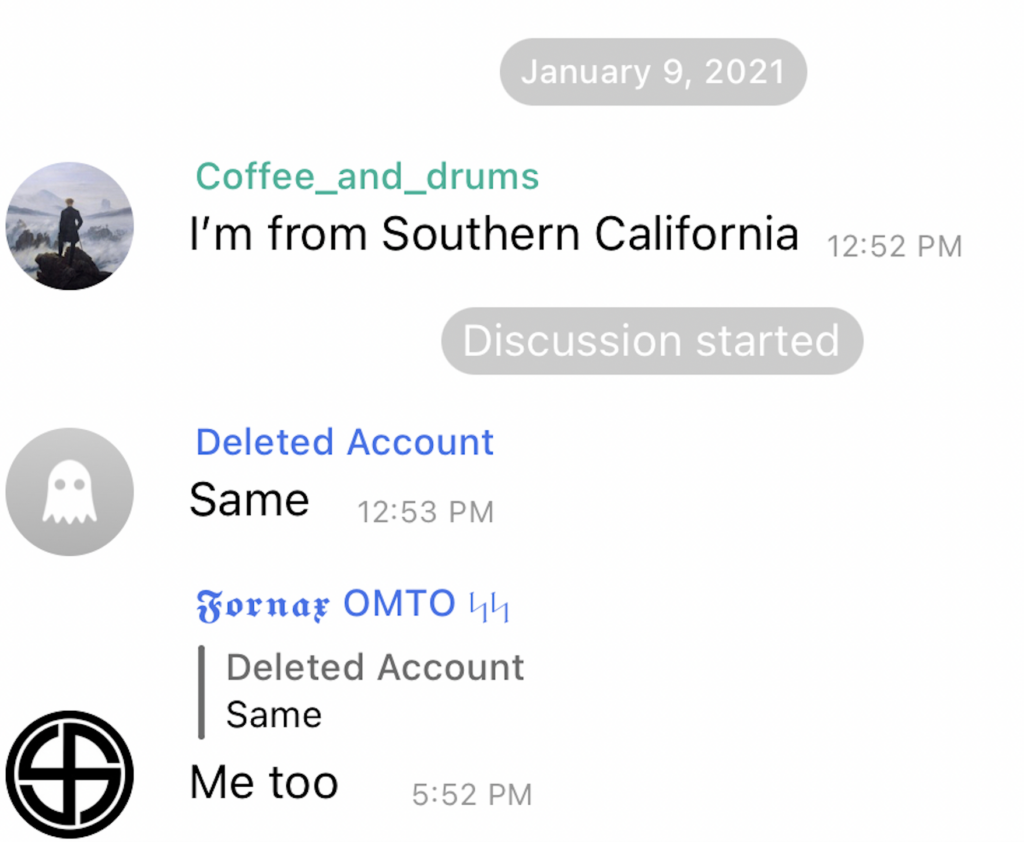 So then, we have a nazi writing under the account Fornar OMTO with handle @fornax1488. 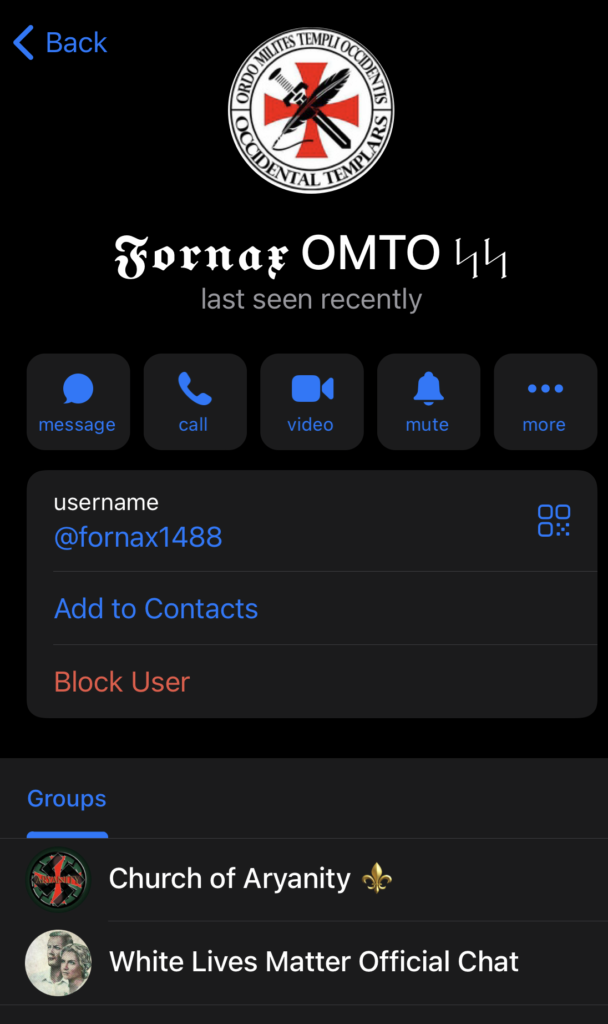 It did not take long for us being active in the chat before people started saying where they lived. And Fornar OMTO said he’s in Idaho. That matched perfectly for what we had assumed.

Nick Stamolis writing as FornarOTMO saying he lives in Idaho

As we mentioned, Nick Stamolis has gone through considerable effort to remove his information from the internet. There are pictures of him from 2017 when he was in the band 1034 in Hermosa Beach, but nothing recent. Nothing exactly that we could match the tattoos he was seen as having. That is until we found him posting selfie in another nazi chat.

Nick Stamolis writing as FornarOTMO showing off picture of his tattoos

Now, we have confirmation of FornarOTMO having a Black Sun elbow tattoo as well as a Black Flag tattoo. Now, these tattoos were only a match visually from what we knew about Nick Stamolis from those who confronted him at the concert in the Spring of 2022. Something to note as well, he mentions being an Utah native, which matches with Nick Stamolis’ truck having Utah plates.  So, we dug deeper.

We were able to locate pictures of Nick Stamolis posted on a Facebook page, even though Nick had deleted his own Facebook. These pictures were from before Nick had a Black Sun tattoo, but there is a clear match to a tattoo visible from the picture posted by FornarOTMO. This, along with the other corresponding evidence, makes the connection that Nick Stamolis (currently of Boise ID and soon to be living in Texas, Dallas area most likely) is with out a doubt the same individual as the Church of Aryanity neo nazi FornarOTMO.

We have been tracking Nick Stamolis since he was confronted at the concert in the Spring of 2022 and sent home with a busted lip. We know he would work out at the Axiom gym on Park Center and we know he was fired from his job as a Line Cook. Nick was a student at Boise State, but seems to have dropped out. We have recently tracked Nick to the park where the local Boise nazi Active Club hangs out.

Nick Stamolis saying he has a fantasy of infiltrating Antifa

Nick Stamolis, like basically all nazis, talks a big talk. He says he has a fantasy of infiltrating Antifa. Well, all we have to say about that is we beat him to it. Not only did Nick not infiltrate Antifa, but he was the one who lost the fight. Nick literally fucked around and found out. He was being a nazi at a concert, so he was confronted by locals. The good folk of Boise sent these nazis home bleeding and then sent us their information. We followed up on that info (which was at the time a license plate and an address, from which we gained a name and then infiltrated the chats Nick is in).

Nick Stamolis pictured at a local park in Boise Idaho

As we have said several times, Nick Stamolis has gone to great lengths to remove his pictures from the internet. So, we decided to find him and take his picture. That is him above in a local park in Boise Idaho taken over the weekend (11/12/2022). When we located Nick Stamolis at a park in Boise on 11/12/2022, he seemed to be practicing sparing with some other nazis. Funny enough, this is the exact same park that the new Boise Active Club, called Pride & Combat posted videos of them sparing in. Active Clubs are loose nit neo-nazi clubs where nazis get together and practice fighting and lift weights. Robert Rundo of RAM started the first Active Club so it is only fitting that Nick Stamolis would be a member of the Pride & Combat Active Club. For more information on Active Clubs, https://www.adl.org/blog/active-clubs-americas-white-supremacist-fight-club 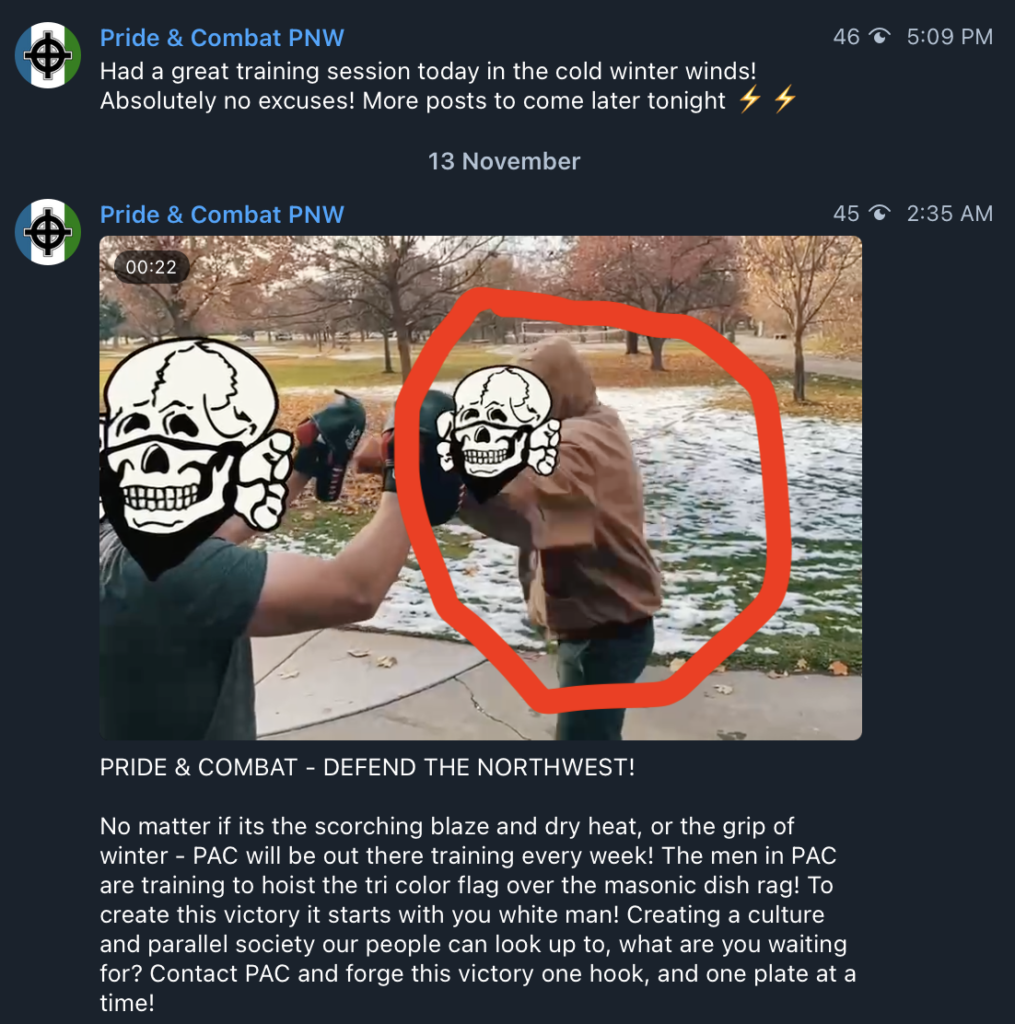 His face is covered in the video edit, but note the exact same Carhartt jacket Nick Stamolis is wearing in both the picture taken of him in the park as well as in the video posted on the Pride and Combat Telegram page. Because we have been following Nick Stamolis for so long, we know the other members of this Pride & Combat Active Club, including the founder who is himself suspected of being a federal informant. We have that individuals information and will post if and when it is necessary.

Nick Stamolis is an active neo-nazi, he holds a position of leadership within a nazi cult called the Church of Aryanity. He is also a leader in the Boise Idaho Pride & Combat Active Club. As part of that Active Club, Nick Stamplis has been involved with some low scale nazi graffiti around Boise. 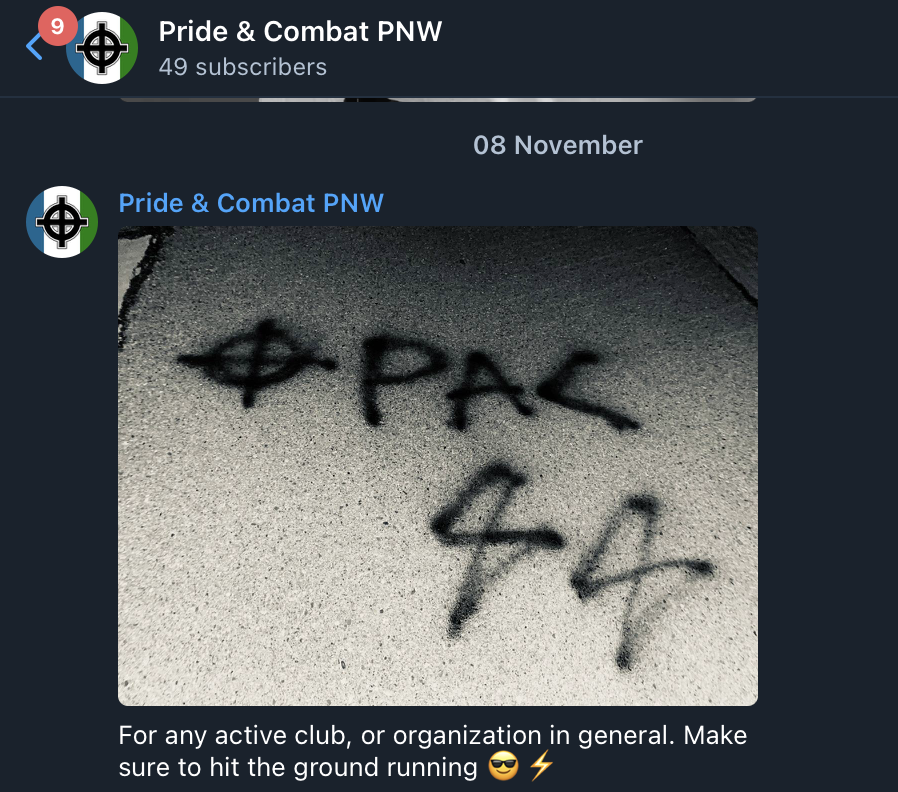 Yup, Nick. As you said, ya gotta hit the ground running. Unfortunately for nazis, anti fascists are many more steps ahead. These, and other similar graffiti, have been cleaned. 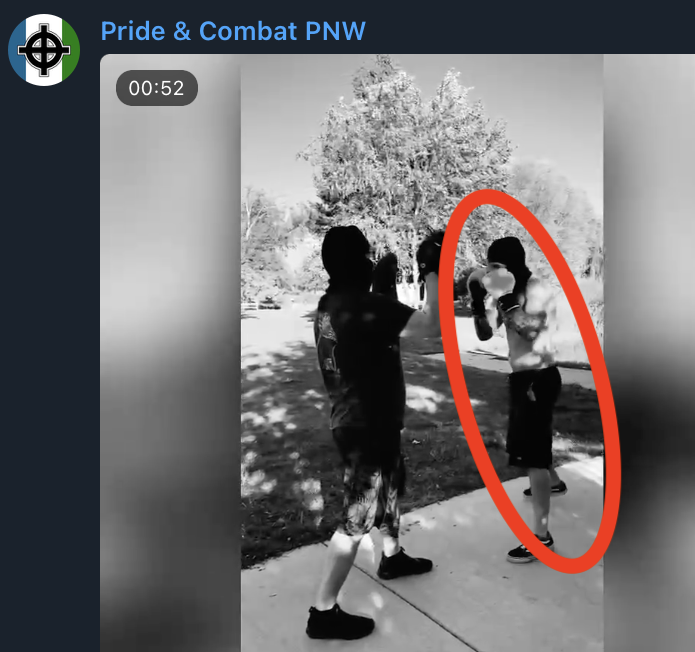 Nick Stamolis sparing with nazi (who might be a fed)

As you can see, Nick Stamolis’ tattoos are visible in the nazi propaganda video

Conclusion: Nick Stamolis is an active nazi with the Church of Aryanity and the Pride & Combat Active Club.

Finally, because Nick Stamolis is moving to Texas this week (Dallas area) we will not be posting his Boise Idaho Address because it is not going to be accurate for long. However, we will conclude this article with Nick Stamolis WhatsApp. As you can see, he uses his real name with a profile picture of the nazi terrorist organization The Order.

Nick Stamolis is an active nazi with connections to Hermosa Beach California, Utah, Boise Idaho, and Texas. He is a gross racist that has no problems being a nazi in public. He was sent home once with a bloody lip for being a nazi at a concert (Nazi Punks Fuck Off) and we hope that the same will happen next time he shows his face at a concert no matter where he might be residing. 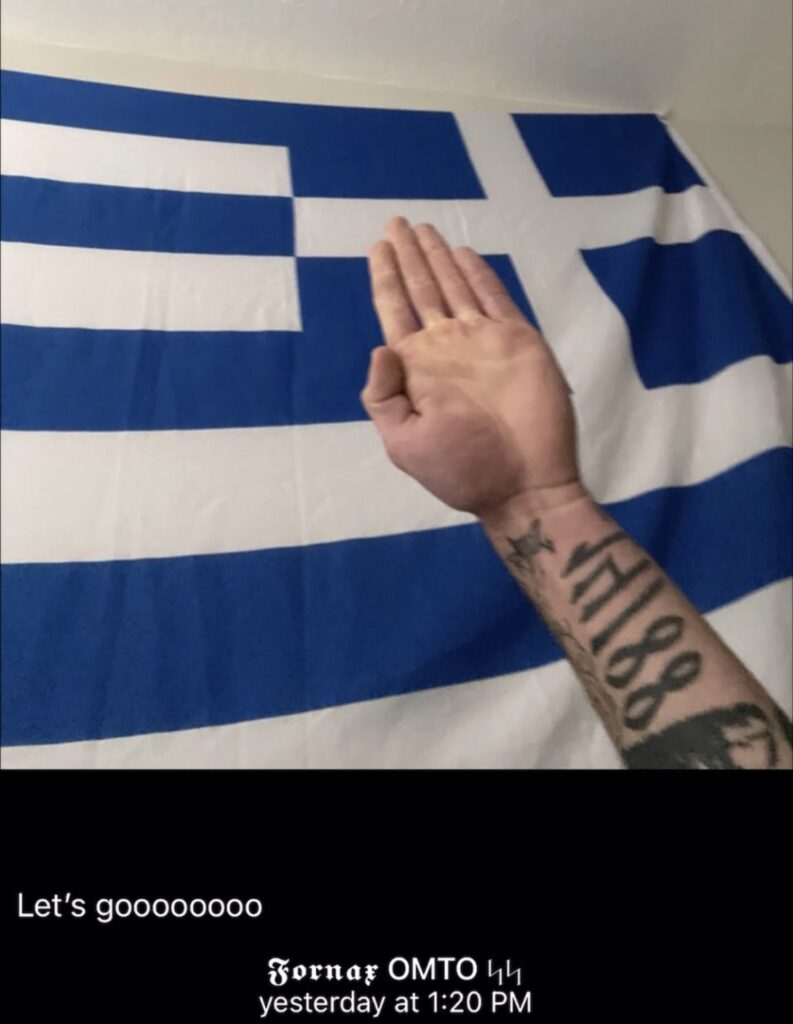 There is no safe space for nazis in the so called Redoubt. We will find you and we will expose you.

If anyone has any further information on Nick Stamolis, organized white nationalism, or another nazis in the so-called American Redoubt of Eastern Washington/Oregon, Idaho, Montana, and Wyoming please reach out to us at redoubtafainfo@riseup.net