Nazis in the Bitterroot Valley Montana

This post will highlight some concerning neo-nazi activity in the Bitterroot Valley and identify some of the individuals involved. 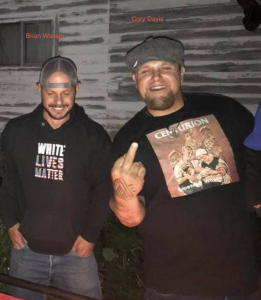 We will be focusing this article on neo-nazis Brian Wistain and Cory Davis. Although we are aware of many other nazis in their friends group, these two are active in the Bitterroot Valley and are particularly concerning. Both Brian and Cory have been convicted of violent crimes against people and they appear to have no remorse and no shame about their nazi and white supremacy beliefs. For instance, they are both pushing their hateful nazi beliefs onto their young children as well as hosting nazi gatherings in the community. Both Brian and Cory grew up in the San Bernardino/Inland Empire area of Southern California. In California they met and married their also neo-nazi wives/partners. Cory’s wife/partner is Mary Pugue she is equally as much of a white supremacist as Cory and also has a criminal history. Cory and Mary moved to MT sometime around 2017-2018, after first moving to North Idaho around 2013. Brian moved to MT around 2017-2018 with his now ex-wife Maggie Nunn. Maggie is less overtly a racist than the others, but there is plenty of evidence to suggest that she is sympathetic to white nationalism and neo-nazism.

So, how did we find these nazis and how do we know they are in fact nazis worthy of a dossier?

Well, let’s just say we are always on the look out for nazis and fascist activity in our community. It didn’t take very long looking on Facebook before we found this picture, which we believe speaks for itself in terms of concerning nazi activity. 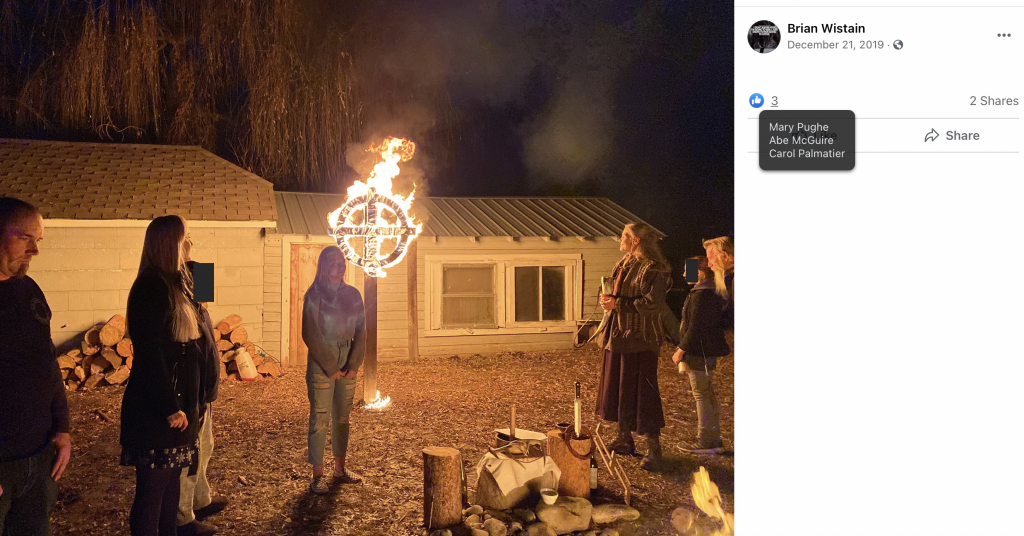 So, we found this picture of a Celtic Cross burning posted on Brian Wistain’s Facebook. And, just in case anyone wasn’t sure that this was explicitly a neo-nazi event, there is a swastika casually leaning up against the stump.

After seeing this picture, we were able to connect some very important dots rather quickly. First, Mary Pughe ‘liked’ the picture. We looked at her Facebook and found several matching group photos, thus confirming her and Brian must know each other. (The like from Abe McGuire is just one of many connections between Cory Davis, Brian Wistain, and a family of North Idaho biker fash, who were also at this nazi gathering, but that is a crew we will address at a latter date. But, for now, it is worthwhile to mention that this Bitterroot Valley nazi gathering was related to the funeral of Iron McGuire, who was part of that North Idaho biker fash family). But, moving on, how about some more pictures from that nazi gathering that Brian posted on his Facebook? This one below shows Cory Davis. Now, at this point we were not sure if this nazi gathering happened at Brian Wistain’s house or at Mary Pughe’s house, but those two had the most pictures of the gathering on their Facebooks so we knew they were involved. 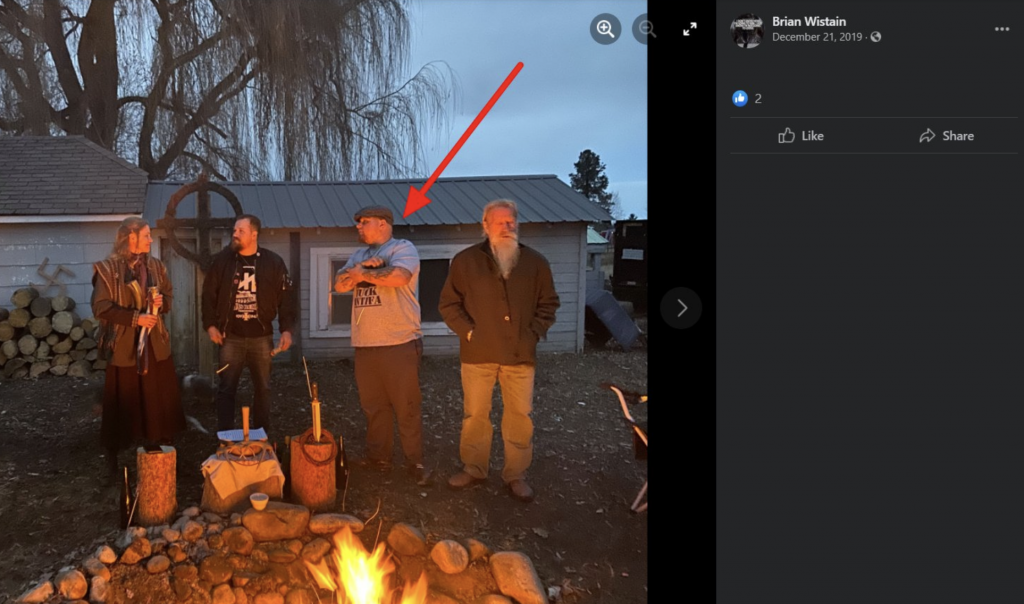 Looking at Mary Pughe’s Facebook, the dots fell into place. Notice the willow tree and new roof in the picture above. 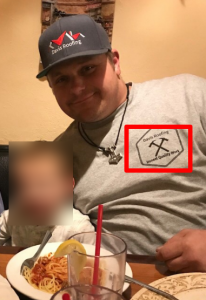 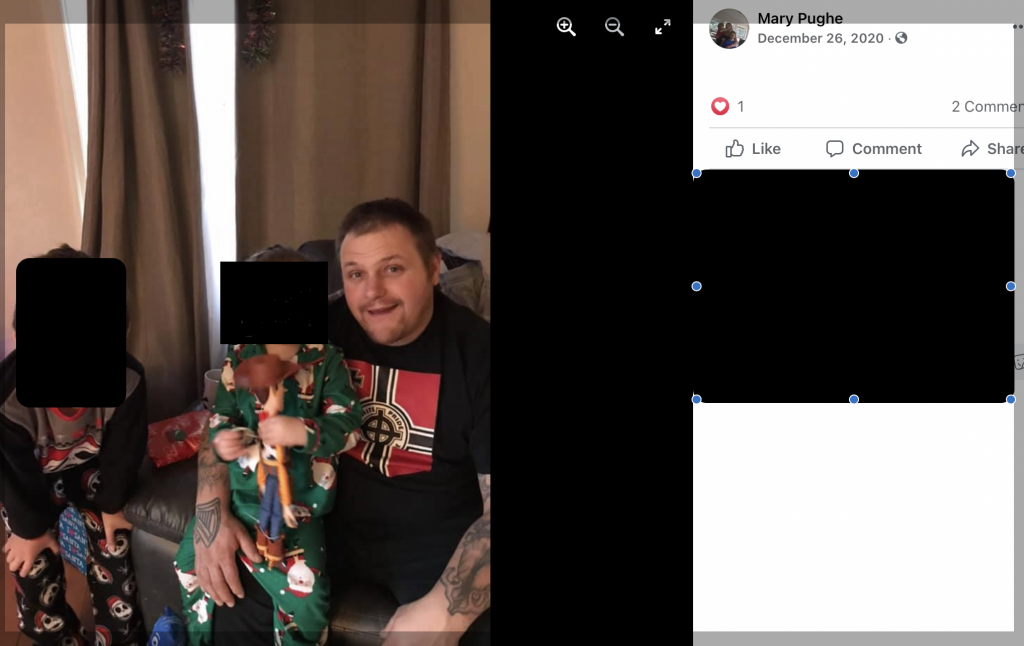 So, on Mary Pughe’s Facebook we found the same male with her kids, both at a dinner and at Christmas. This strongly suggests her husband or father of the kids, which we eventually confirmed through other family photos that we will not be posting here. But, before finding family photos, we noticed the shirt said Davis Roofing. We looked that up, and sure enough Davis Roofing is a company owned by Cory Davis. The name Cory matched with the name Cory mentioned in family photos. Moreover, the address we were able to find for Mary Pughe was the same as that listed on the Secretary of State’s website for Cory Davis’ company Davis Roofing.

Now we had an address and a business name, Davis Roofing. Remember that new roof in the cross burning pictures? Well, not only did we take a quick look at Google maps and confirmed the willow tree in the yard. We also figured we’d go ahead and give the house a checkout in person too. Yes, we can confirm the nazi gathering with a cross burning happened at Cory Davis and Mary Pughe’s house at 552 US HWY 93 S Hamilton, MT 59840. If you’re heading south on highway 93 from Missoula, its just south/past Hamilton and on the left hand side of the road.

That said, Cory Davis and Mary Pughe are moving. 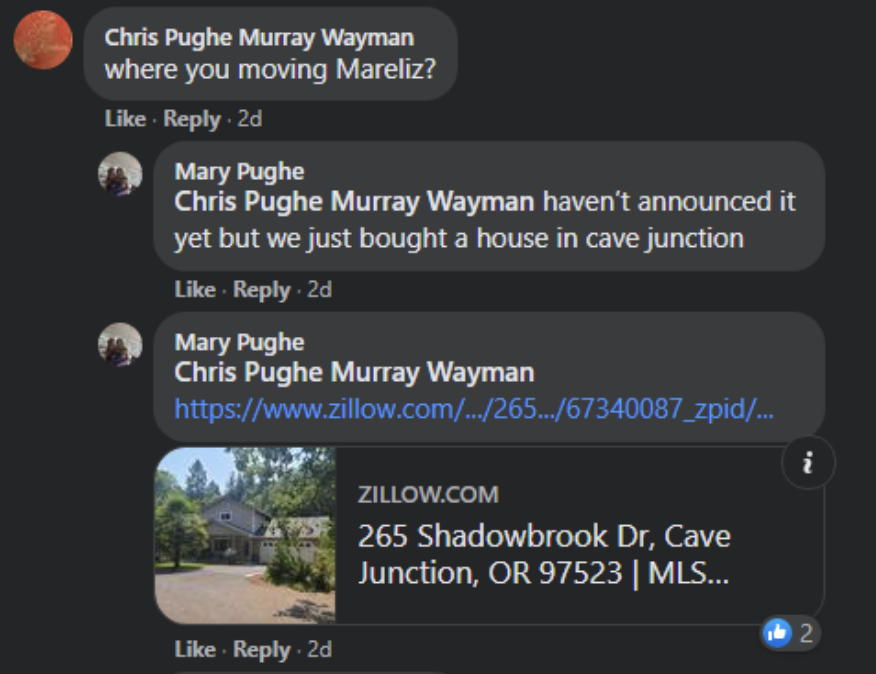 So, Cory Davis and Mary Pughe are moving to Cave Junction Oregon.

We want Oregon comrades to be aware of this nazi couple. And, so before we get into more info on Brian Wistain, here is some further info and photos of Cory Davis and Mary Pughe. 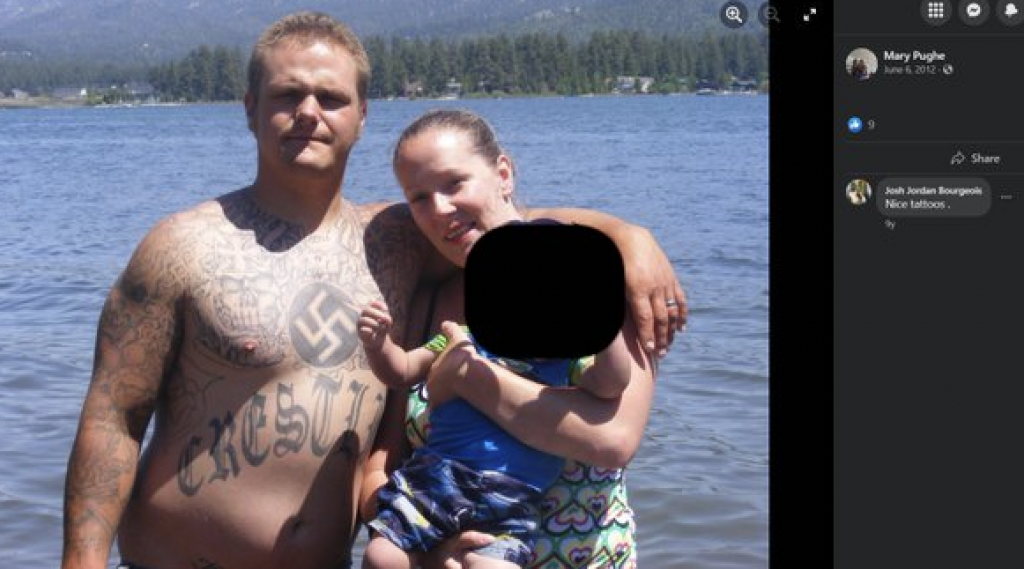 Cory’s tattoos are an obvious indicator of his nazi beliefs. He has not changed his beliefs since this photo was taken in 2012. 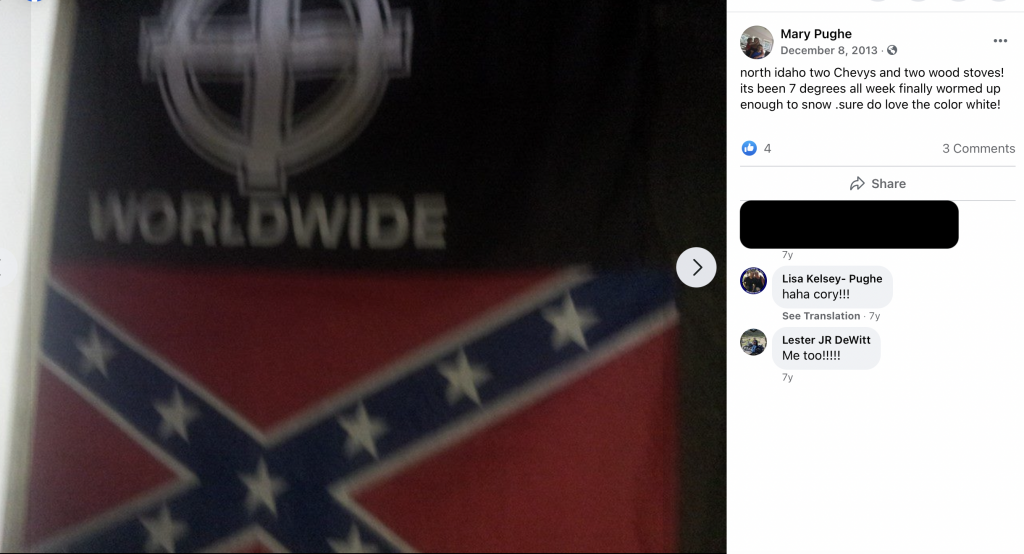 Note Mary’s comment “sure do love the color white” 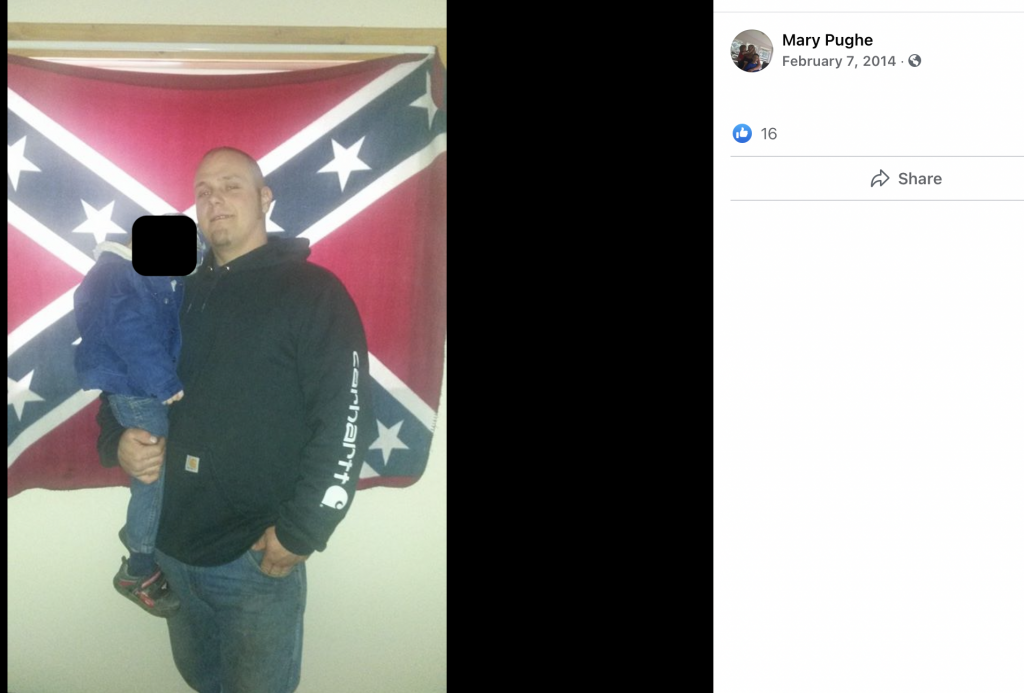 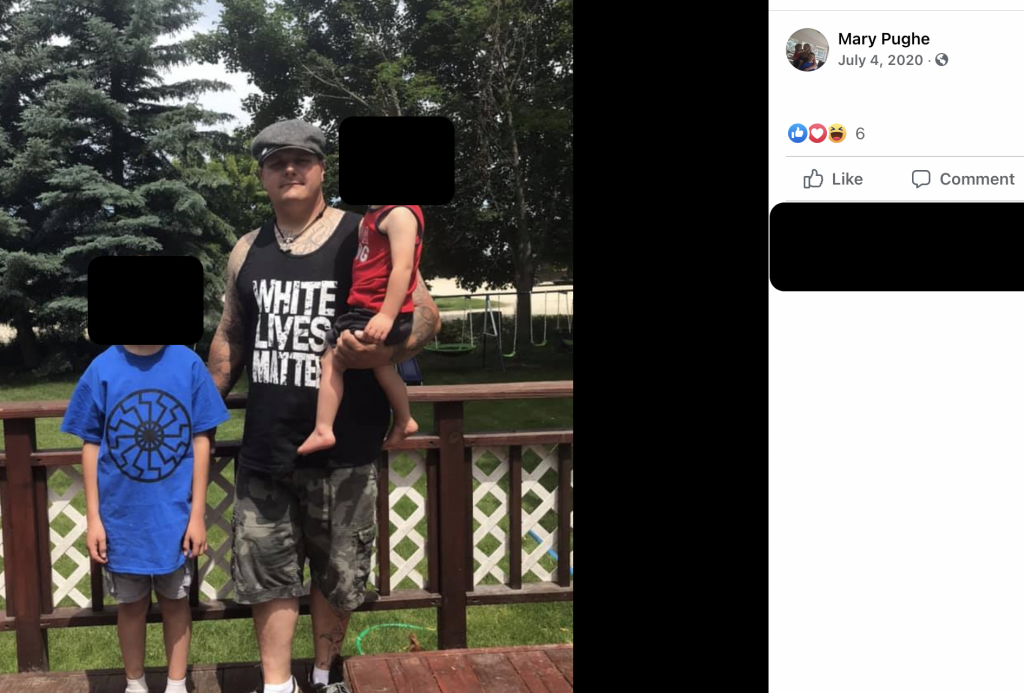 Cory Davis with kids, both Cory and his son are wearing fascist nazi clothing. July 2020 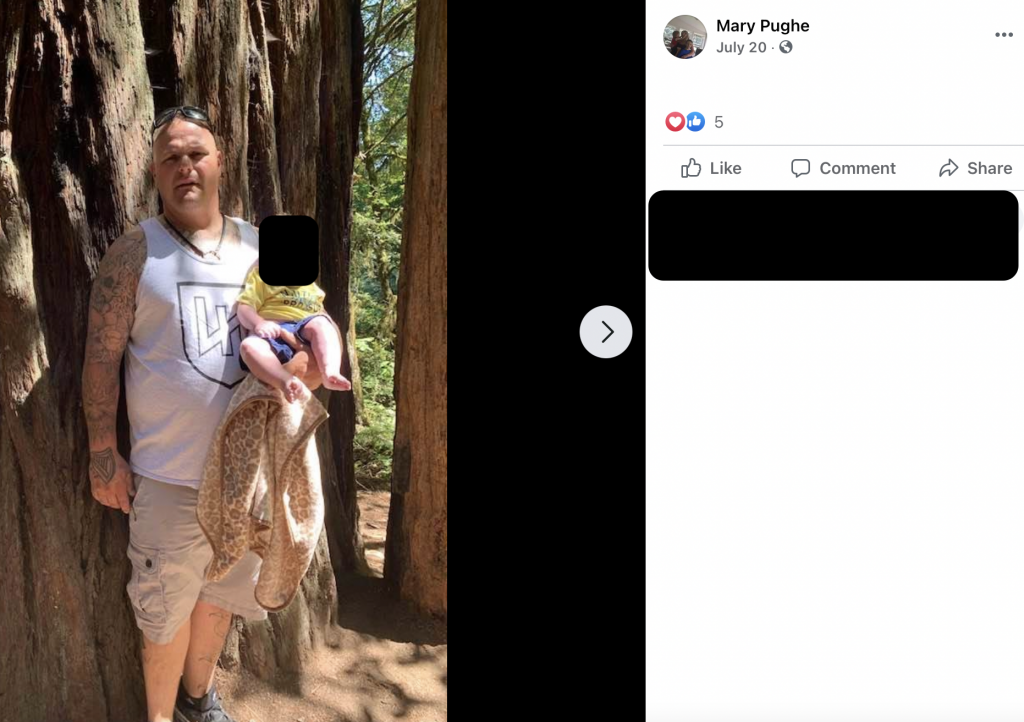 We believe it is obvious that Cory Davis and Mary Pughe are fascist neo-nazi, unsympathetic white supremacists. It is concerning, though not surprising, they would put their kids in neo-nazi clothing (the design on the blue shirt is the Sonnenrad, which is an ancient European symbol that was appropriated by the nazis. It is also known as the Black Sun). Also concerning is Cory and Mary’s criminal record. 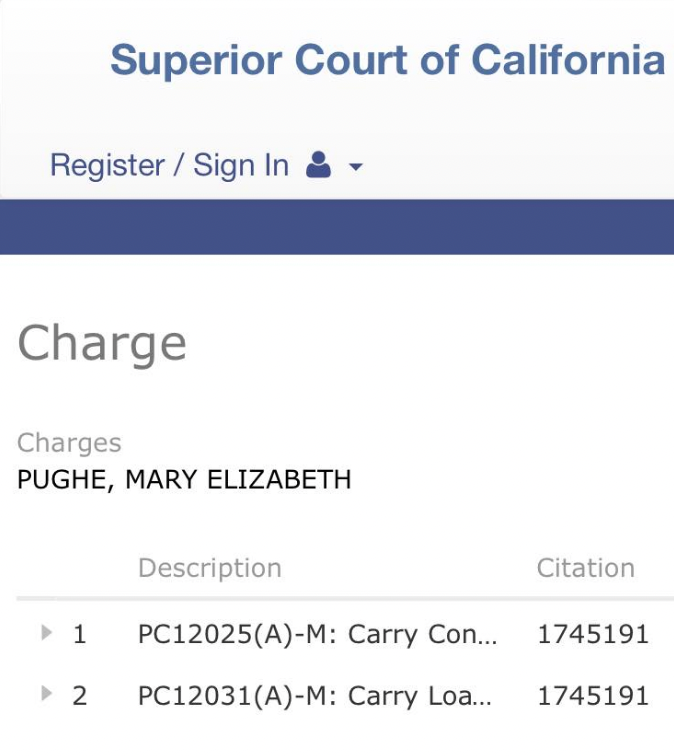 Mary Pughe was charged with illegally carrying a loaded handgun. 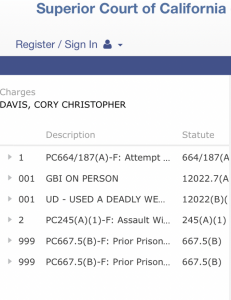 These are just some of the criminal charges Mary and Cory have been convicted of. We are only including their crimes against other people, and this list is not inclusive. Note that Cory was charged with attempted murder, gross bodily harm, use of deadly weapon, assault with deadly weapon. Mary was charged with illegally carrying a loaded concealed gun. Cory was not convicted on the attempted murder, but was convicted on assault with deadly weapon. It was his second strike. Cory moved out of California very soon after getting out of prison. There should be no mistake that Cory and Mary are violent, dangerous nazis and a threat to any community they live.

Moving on to Brian Wistain. He was obviously easy to identify because he posted the pictures of the cross burning on his Facebook. 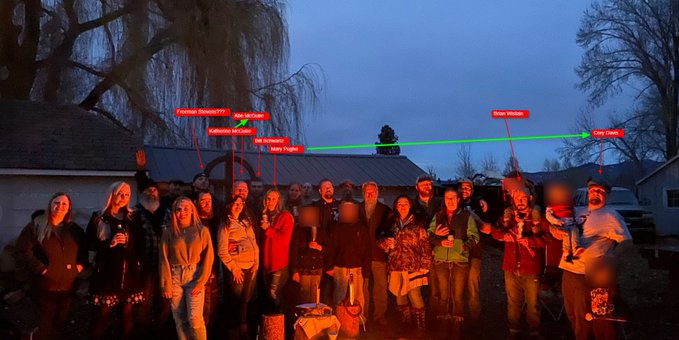 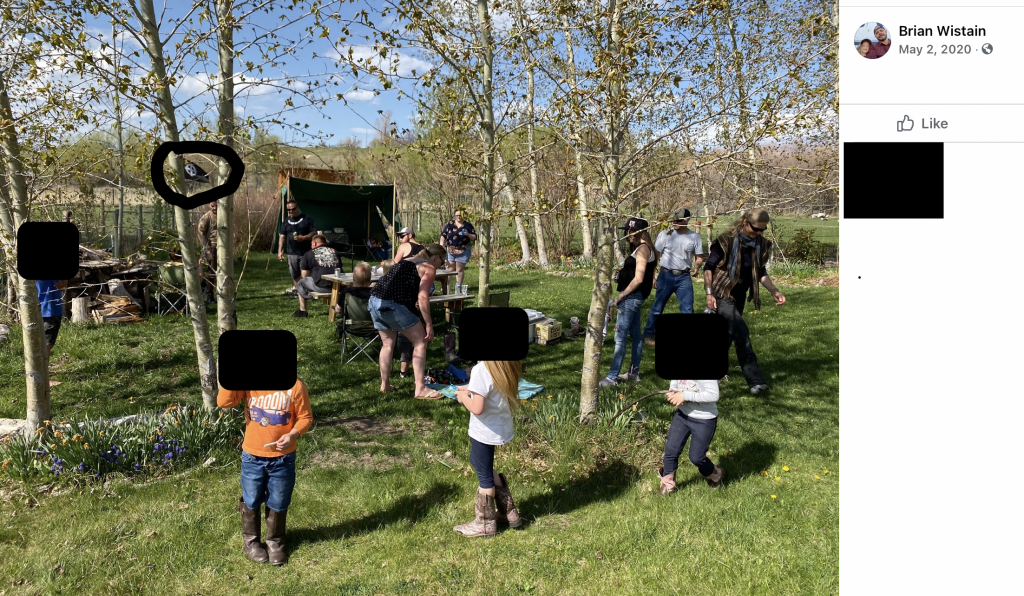 So, it’s obvious that Brian Wistain, just like Cory and Mary, hosts gathering of nazis at his house. These are large, multi family gatherings. But, note in the back of that picture above and circled is a White Pride World Wide flag. There were several of those flags hanging in the yard that we found in multiple pictures.

Other than the obvious fact that Brian posted these pics on his Facebook, we located his address through a simple search. He owns his own business, so like Cory Davis, is listed on the MT Secretary of State website.

Brian’s new and current address, however, is 417 Rickets Rd. Hamilton MT. That address is where he lives, as confirmed by the multiple pictures he posts of his house on Facebook as well as photos from Google maps. The address of 417 Rickets Rd in Hamilton MT is where Brian hosted several nazi gatherings.

That white truck pictured above is Brian’s primary vehicle.

So, why, other than him being a nazi, are we concerned with Brian Wistain? Well, just like Cory Davis, he is pushing his nazi beliefs onto his children and he is a violent and dangerous person.

This is Brian Wistain’s most recent arrest. Warrant issued for failure to appear. We do not know what the original crime was, but it coincided with some reports of domestic violence. We have information that we will not post here but have been passed on to relevant parties. Needless to say, Brian makes himself look like a great dad in his Facebook posts, but those are simply white supremacist propaganda aimed towards his nazi buddies. We have evidence of him, let’s just say, being terrible to his children and his now ex-wife. That said, his wife is not great either, but no one deserves to be victim of domestic violence. 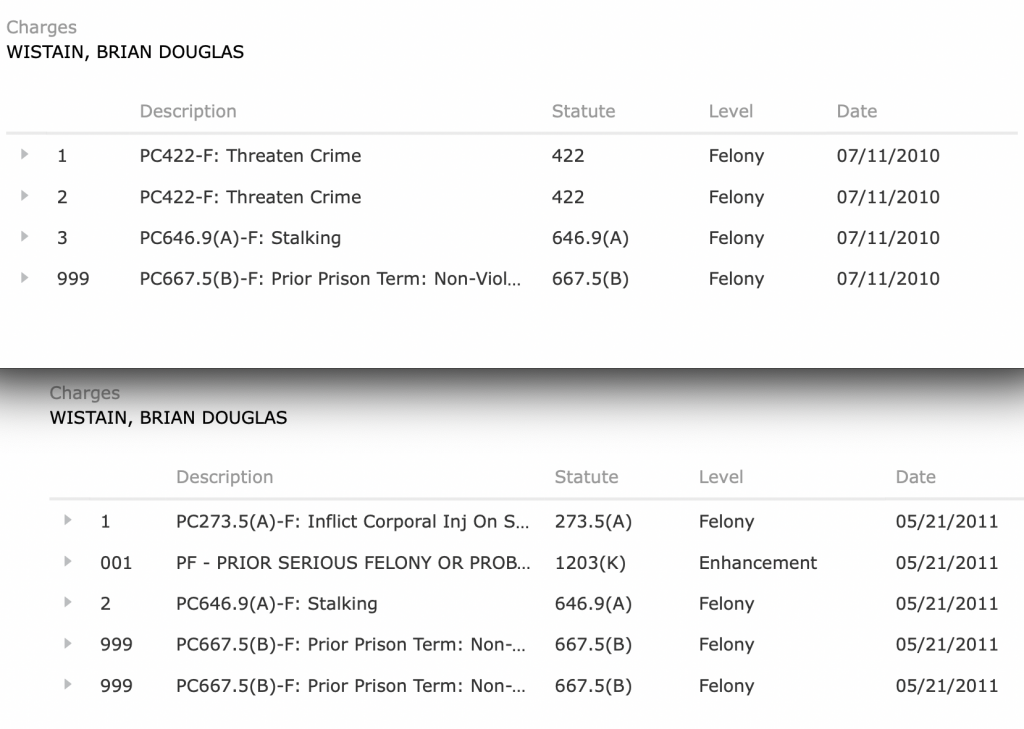 Some of Brian Wistain’s criminal charges when he was still in California.

As you can see, Brian has a history of violence and domestic violence in particular. Back in California, he was arrested for stalking and inflicting corporal injury while he was still on probation for previous stalking charges. He, just like Cory Davis, moved out of California soon after getting out of Prison for his second strike.

Although Brian Wistain’s wife has now divorced him, she also has some serious parent problems. We are not going to go into detail due to the involvement of minors. But we will say it is not just Brian who seems to be problematic with the children. 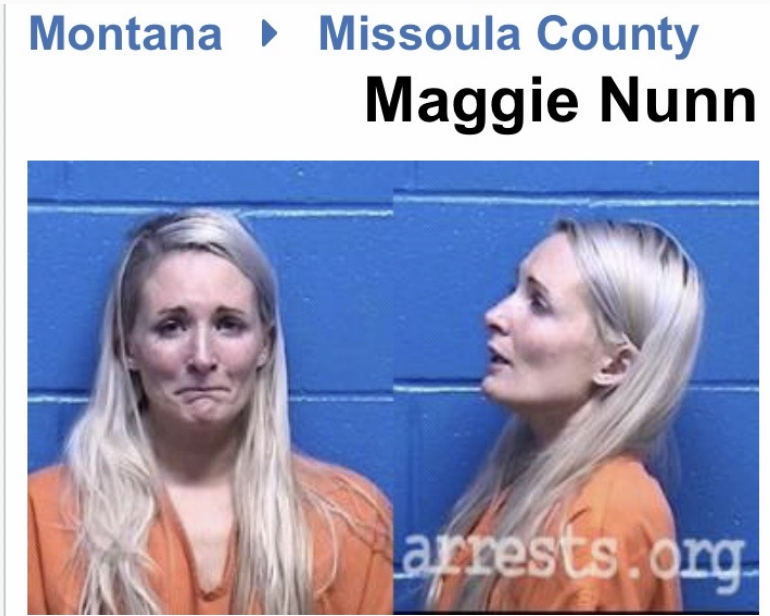 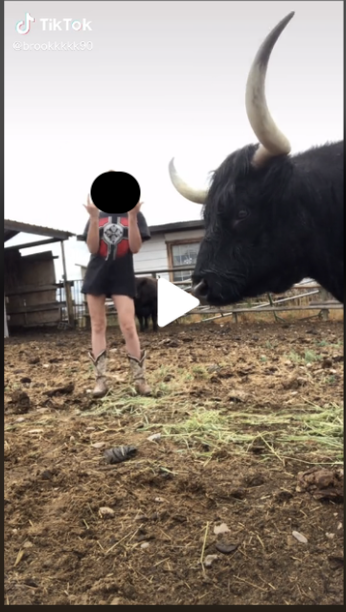 Maggie, just like Brian, act like they are the best parents in the world. In fact, Brian pushes the children to embrace white supremacy and Maggie goes along with it. She is just as much a danger to their kids as he is and she embraces white nationalism just as he does. 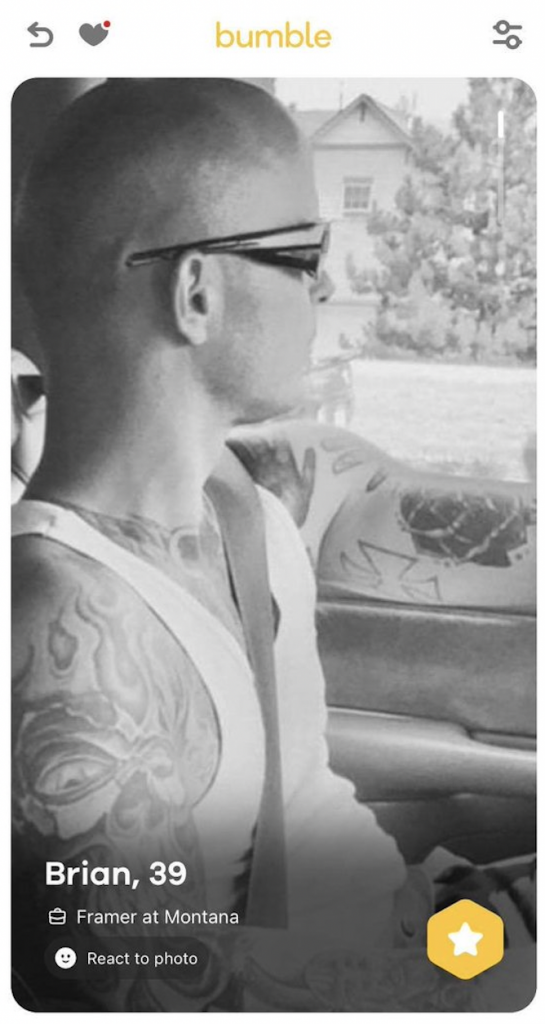 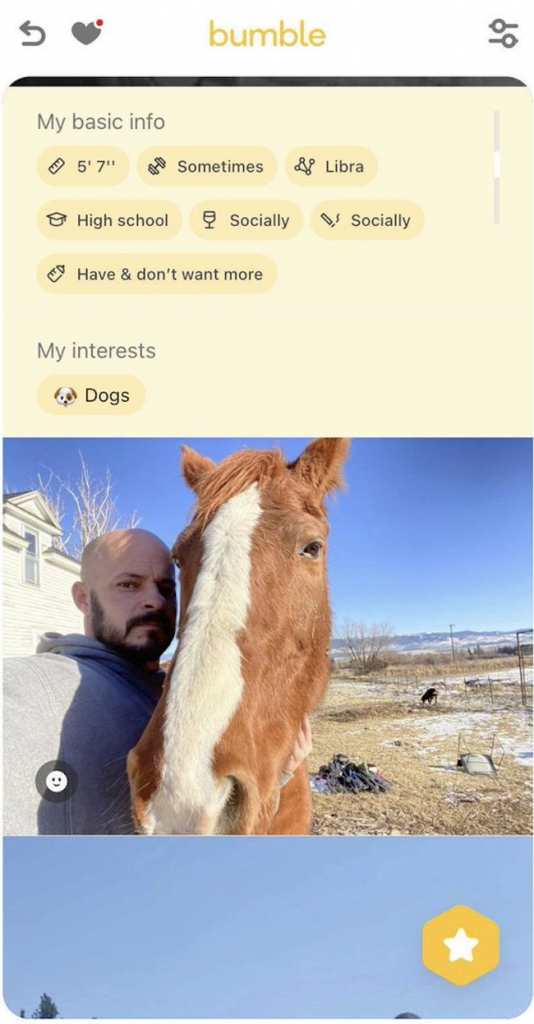 Brian Wistain on Bumble. We would add that one of his other interests is white supremacy. 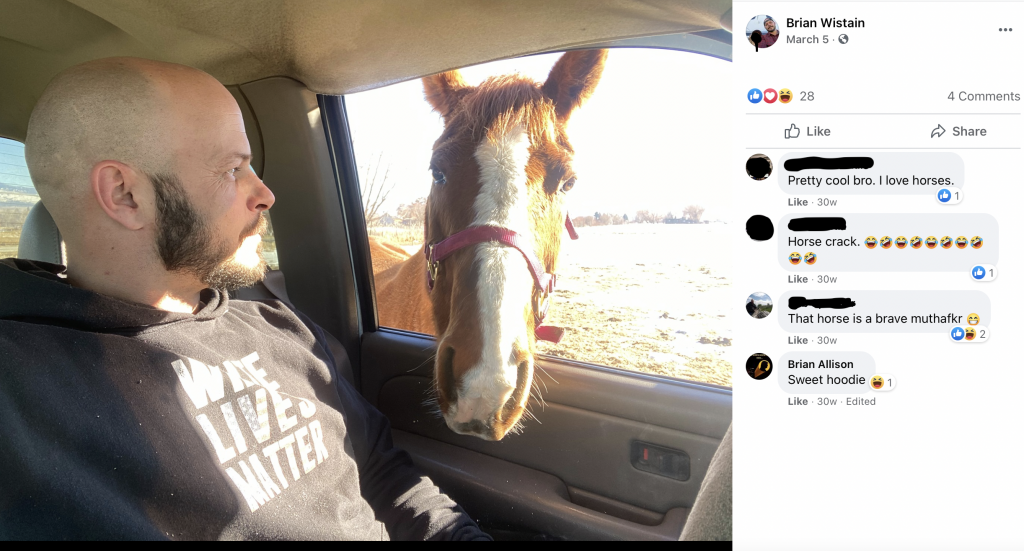 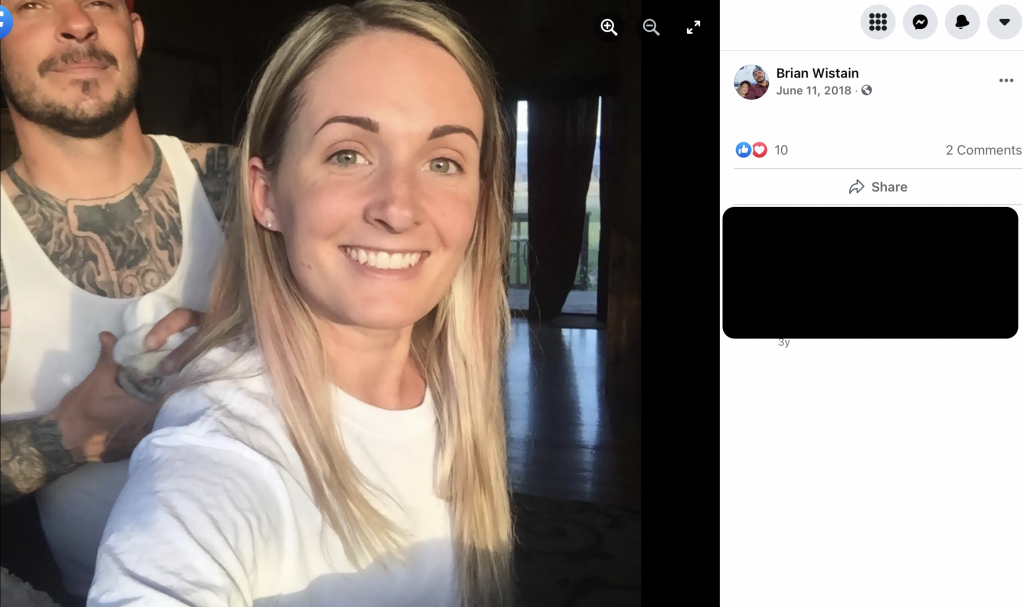 They are a threat and danger to their children, pushing white supremacy and white nationalism onto them at a young age. They are also a danger to their community. They are currently in the Bitterroot Valley area of Montana. Maggie Nunn lives in Missoula MT and attends the University of Montana. Brian Wistain lives in Florence MT and works self-employed as a framer. Cory Davis and Mary Pughe live just outside of Hamilton MT, and Cory works self-employed as a roofer. Cory Davis and Mary Pughe have recently bought a house in Cave Junction Oregon and will be moving there soon. This dossier was written to inform the community and others about nazi activity and the large nazi gathering these individuals have hosted. The information used in this research was entirely publicly gathered and available. If any one has any questions, information, or would like to learn more please contact us at redoubtafa@riseup.net

No comments to show.